ReVerse Butcher: This is not a violin, it is a doorway

This is not a violin, it is a doorway. I know this, because I read a lot. My notes and references are usually very detailed breadcrumb paths. But, as Brion Gysin said, the mice can get into the larder of language (and I add to his point, memory). And, well… I have no control over legions of mice. 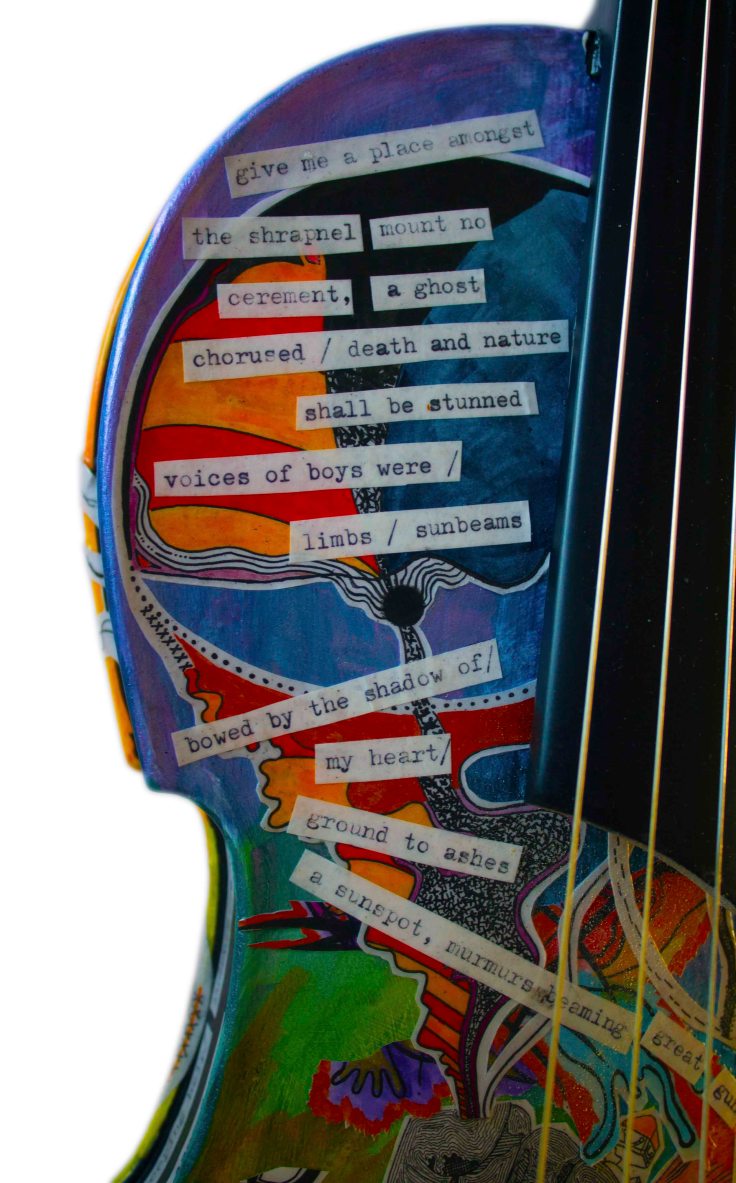 I thought I read that somewhere, I remembered writing it down. But when I searched for the scrap, and the crumbs that lead me to it, I found nothing. I (re)checked the books, trawled interview transcripts, I asked the nerds, went to the library, and I even googled it. Maybe I read it, or wrote it in a dream. Maybe someone said it to me, and maybe I remembered it wrong. Maybe I knew I was going to write this in the future. Maybe I heard it over the breakfast table in a parallel dimension. I don’t know, but this does not make it any less relevant. I’m not claiming that it’s mine. But I do know one thing.

This is is not a violin, it is a doorway.

I spent four years (un)writing a collaged artist’s book called On The Rod. My friend Sarah Curro (who plays 1st violin in the Melbourne Symphony Orchestra) saw parts of the book as I was (un)writing it, and then she comissioned me to work with one of Paul Davies’ unique semi-acoustic Spur violins. Curro asked me to ‘make this violin like that book’. Because this violin was specially designed, it would be playable once altered. But as soon as I picked it up, I knew it was not a violin.

When I think about music, I think about time. About how music is a form of transportation. How both time and music are about the body, and also not about the body. How often our memories are triggered and formed by our experiences with music. How music has been used by corporate systems to sell us things; to make us calm and comfortable when we should be angry; make us feel sexy, young, in love, and easily pliable; to make waiting seem more reasonable; to make us sad, or excited; to love and to revile; to teach us socially acceptable forms of comfort and disgust.

Music, like math, is just another language, just another way of notating time. Thusly, it can be hacked and exposed for all its absurdity, inherent (un)intelligence, and wonder. Music has been used as ritual, across all the polarities of several spectrums. And if we play a piece of notated music more than once, while yes, there will be nuanced differences, it usually sounds recognisably the same. Like portraits of the same person by one hundred different artists, or suddenly noticing the family resemblance across a series of siblings you didn’t originally realise were related. Music is like time, and time is but a memory of itself.

But in order to (un)write a violin, I had to think about how to visually re-wire systems of music. John Cage (in Notations, 1968) and Teresa Sauer (In Notations 21, 2008) questioned the antiquated nature of the musical score. After all, spoken and written languages always develop and evolve. Most languages are not written down as they were 200 years ago, or 2000 years ago. But, for the most part, musical notation has remained identical for centuries. Cage and Sauer ask us to consider what limitations this imposes on the way instrumentalists, composers and musicians conceptualise music.

Of course, the acts of playing and listening to music have, and continue to, change and develop just as much as any other language has. It is just as adaptable. It is here where I remembered the graphic score.

When I was a poet playing with improvising largely all-male psychedelic punk and/or experimental noise bands, they would invite me along to do vocals, and then play loudly over the top of me. It was as if they couldn’t read the spaces—it was all explosion, eruption, exhaustion. It was about marking time, and with it, space. I am more interested in the concave nature of time, what is possible in the darkest parts of the oceans where the sonar goes rogue, the echoes, the loops, the carving of it, the cutting. I came to think of music as being a house for poetry to break into. I learned to bring a louder amplifier, turn it up. I learned to recognise the exact moment to drop one thing, even though I had hundreds of things, and repeat it until the barest of points stuck. No point in trying to play

steamroller, no way to enmesh in collaboration(s) that were really looking for decoration. But it was there I learned to count the bricks and look for the crumbling mortar; to enter the room like a line of ants; to make the poems more like a gas leak.

Often the ideas behind experimental music are interesting, but the outcomes are entirely unlistenable. Let’s be real. A large majority of it is the domain of 20–40 something straight white dudes that really want you to be as fascinated by drones as they are. And that’s okay, because when you get to the 1% of interesting and well-constructed experimental music it can blow your ever-loving mind. Anybody can do, or say, or play anything, which is precisely what makes it both interesting and mundane. However, it is often only in those kinds of lawless creative spaces that breakthroughs happen.

Sarah Curro is a highly skilled and very sensitive classically trained musician. She understands the syntax of music like I understand the intricacies and multiplicities of writing and (un)writing language. We both know music from entirely different angles.

I decided to do a graphic score of Sarah Curro’s favourite piece of music and install it on the instrument. The piece of music that moved Sarah the most in her life was English composer Benjamin Britten’s War Requiem Op. 66, completed in 1962. It had choirs, and Latin, and French horns and it needed a conductor, and everyone playing it publicly was probably wearing a suit. It also had poetry by Wilfred Owen, so now I had an in-road. I’m an expert at destroying poetry. Now: how to destroy music—visually, on a concrete object that will be a violin, a doorway, and (in the right hands) a method of transportation?

The nine graphic scores that appear on the violin are linked, but not in sequential order. There are 10 parts to The War Requiem. There are nine drawings, culminating in the finale—the floating totality of the harmonious visual effect of the other nine independent scores juxtaposed together on the object. The invisible 11th part is everything she will ever play on it. Each of the nine drawings could be played 100 different ways and still be the same piece of music. I wanted meta-music, music on top and inside of other music.

There is an undeniable emotionality to music, and the violin in particular carries with it a weight that few other instruments carry. It has a vast variety of utility blades in its arsenal that even a tuba could not conceal from airport security. When someone tells us a sad but slightly self-involved story, there is the popular sarcastic quip, “Hold on—let me break out the tiny violins for you.” Now, I don’t think the violin as an instrument is sad or self-involved, but the power that quip borrows is that the violin vibrates to a tone that favours (sometimes painful) introspection, and which does move one in ways that other instruments cannot. That is why all violins are doorways, but this violin in particular is a saloon door. The door swings both ways.

All my technical musical reading skills (learned early on in my life) are gone now. As an adult, I ended up poeting or singing along with psychedelic, punk, and experimental noise bands. Now, I could teeter out a scale and make an educated guess at reading a traditional score, but all of the music I ever played in my life that transported me anywhere was either improvised, or learned by ear. It was based on relationships between artists, counting, timing, luck, rehearsal, repetition, and feeling—the only things written down were lyrics, lists of loops, tour dates, and set lists. If someone asked me to write down what I wanted them to play, it’d look more like a map with no co-ordinates than a score. It would be a cut-up graphic score.

So that’s what I did. I made Benjamin Britten look as it feels, then I cut it up and pasted it onto this violin—onto the back of this doorway, like a Xeroxed concert poster. Sarah Curro is headlining. You should all be there.

ReVerse Butcher is a multi-disciplinary artist with focuses in making unique artist’s books, collages, visual art, writing & performance. She will use any medium necessary to engage and subvert reality until it is less dull and oppressive. When she grows up she wants to be a well-read recluse. She currently lives in Melbourne, Australia. Her recently released book “On The Rod, An Artists Book” is available now here: https://reverse-butcher-bookshop.myshopify.com/