The Book of Miracles by Zack Anderson

A burning log fell through the air like a ship, a plank
fell onto a field of black and tinged it blue.
If the field is a meadow, count its little black hairs,
if the field is a flag, count its violent stars.
Renounce all forms of sex unless it’s with a landscape.

A blue snow arrives in a meaningless landscape.
It isn’t snow, it is a cloud of letters. Bloodhounds
pursue the letters through the whitening fields.
To kill something, say its name. No new sentences,
a gunshot remarks from the edge of the forest.

The letters call into the copse without entering.
Something stumbles out with the body of a stag
and the head of a stag. The letters bring it down
by the neck. Each hurt breath is a comma.
The pack of letters buries it in its name.

In my pain crown I hold utterly still as gold
piano wires arrow into the back of my eyes.
Black specks on the field are horses or birds.
Scale does not hold here. Even in the dark
I can see the three suns, hovering.

Three suns canceled out by the Southern Cross.
A body dies on top of a second body, a landscape
falls into another landscape. Three suns settle
on the peaks and triangulate a signal to reach
the mysterious white plane circling the city.

The white plane never lands, it holds an approach
pattern until the map stops making sense.
Nothing ever disappears, never really. Stare
at the multiplying sun, lens flare, sundog.
A layer of planes marks a new geological time.

A cloud drifts and stalls over the city,
goes up in flames. Wild white turbines
blow the cloud around the perimeter.
Difference can’t hold across a medium.
Soon the city takes fire too.

A bomb dropped and the landscape grew around it.
Now the city exists in two states. There is the city
and its blast radius of suburbs, city and uncertainty.
Divide the measurement from the explosion,
level everything back into a flat white plane. 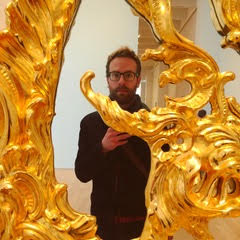