I would do anything to not be cute,

fifteen, though it’s, without dispute, what I am,

could hold in place with fingertips.  Brown eyes

despised, you pull my string to blink as pink

though I won’t last the year, a skating rink

romance before I disappear twenty

plus years to black market rumors until

a monochrome facsimile is found

eyes without string, anime black-brown.  Will

I am okay these days with being cute. 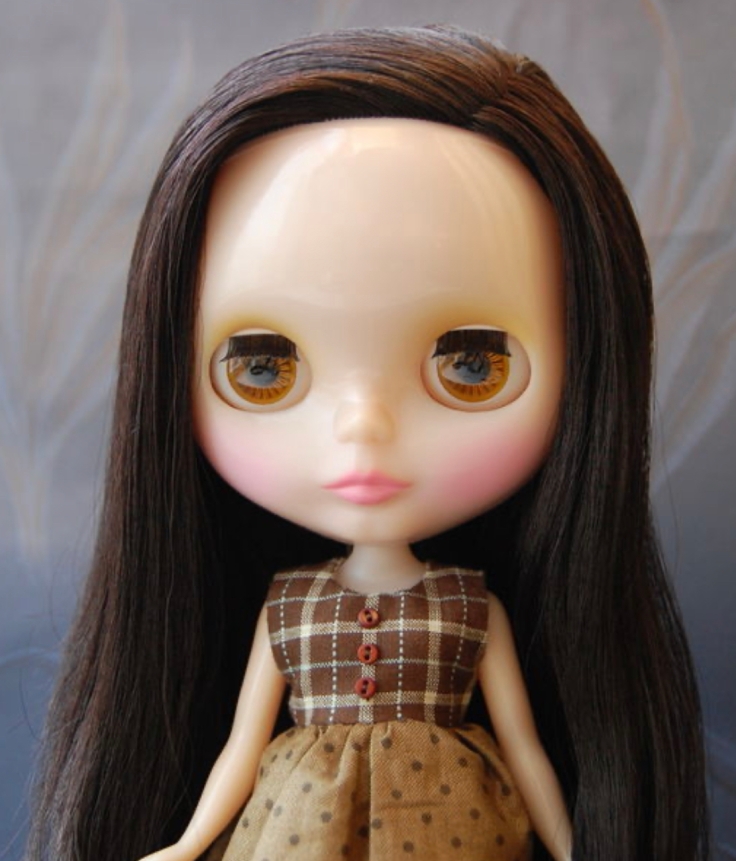 I Was Blythe, annotated:

There’s a picture of me at five dancing around my 70’s olive green, boring Mormon living room in an uncharacteristic garish red nightgown.  The gown, like all my nightgowns, is full coverage, down to my ankles with long elastic banded balloon, sheer sleeves.  As ridiculous as this get-up might sound on a girl in early elementary school, this was the first article of clothing I ever owned that made me feel sexual and womanly not repressed or a little girl, though I very much was both.  Its shade of red, if it were a lipstick, would have been named Harlot or Temptress, and that’s how I felt inside of it even at that young age — perhaps my sexuality was a little precocious due to abuse.

Whatever the reasons, I felt powerful inside of that nightgown.  I felt more myself than in the knee-length gingham dresses and embarrassing culottes I was dictated to wear in my closely-controlled Christian home.

I imagined myself as some sophisticated Hitchcock seductress like Grace Kelly in Rear Window – one of the old movies I watched many times with my father, a happy memory.  Grace Kelly in her floor-length flowing palest pink nightgown was my ideal of a glamorous, sexual woman.   She lounged in Jimmy Stewart’s modest apartment with her modelesque physique, such casual perfection.  In her designer lingerie, her every stunning gesture was both entrancing to me and foreign to my sheltered upbringing.  It felt like an elegant and sexual celebration of the body that I was permitted to watch and eagerly did in a home that celebrated nothing of the sort.

Every gaze upon my outfits by a man in my house (whether it was pajamas, school clothes) was accompanied by verbal or physical assaults, reminders the body was a thing to be cloaked and hidden with as much fabric and layers as one could devise.  Failure to hide the body was to invite punishment, touching and abuse.

Twirling in my living room in the red nightgown, I imagined myself lithe, blonde and tan — somebody’s ethereal movie fantasy.   It was the first time, through dress and mental subterfuge, I ever thought I was a word that I’d first heard in ballet school from giggling girls.  It was a word I’d been firmly admonished for using, without at the time understanding, in front of my parents — “sexy.”

I don’t really know why I even owned this nightgown.  I can’t recollect how I got it.  It wasn’t immodest at all except in its color, but it was definitely suggestive — a hue too decadent and devilish to have been purchased by puritans.  I feel it was probably bought for me by my soap-opera-loving grandmother.  I can see her imagining me as a child-sized Erica Kane inside of it, a soap opera favorite of ours – a small in stature character but definitely the embodiment of sexy versus cute.  I like to believe my grandmother bought it for me.

The important thing was that like my gestating independence, sexuality and self-awareness, the nightgown existed.  Inside of it I felt uncharacteristically sexy and dangerous.  I didn’t feel what I always felt – and still do most of the time, cute.  Cute was the wide-set shape of my cheeks and face, the tininess of my mouth and my big doll eyes, my short body that was always the last in line of girls categorized by height.

I never prayed — even as a little girl.   Never believed in any god or religion — especially the one to which I was consistently exposed.  Maybe it was because of the things that were done to me under God’s supposed watchful eyes by one of his appointed servants, or maybe I was always just my own person, but religion and prayer never presented it to me as a viable option. Had I prayed, however, one of the things I would certainly have prayed for at this moment of my life was to be anything but cute.

The word cute became a curse to me – it was the ultimate stamp of disapproval from boys in school and even teachers who referred to me by it with the most condescending of smiles.  I wanted pre-teen mouths to drop open, to be imprisoned and malleable once they gazed at me as Jimmy Stewart was as he laid helpless, broken legged, staring at Grace Kelly. That was female power to me in its purest form.  Cute felt condescending and completely powerless.

Then as I became middle school age, having experienced the dark side of sexuality in my home and being consigned to cute, covered Christian girl goody-goody status in all my social interactions, I started making dangerous, devious decisions.  I befriended the new girl in my neighborhood who, though my age, was not only tall and blonde but much more on-point sexual than even Grace Kelly.  She came to my town as sexually advanced and promiscuous as I was consensually inexperienced.

Under her tutelage and supervision, I talked on the phone to my first older boy — high school boys – football players with muscles, intense teenage sexual appetites.  Boys who could drive cars, had bodies as tall as our dads but assuredly more powerful.  Somehow she procured phone numbers, and we seduced them on the phone where I felt provocative and bold in my anonymity though still betrayed for what I was with my cute. kittenish voice.

Though I never said anything as crude and concrete as she did.  I was in awe of her dirty talk and confidence.  I had neither of these tools in my arsenal yet.

Eventually, we made plans when my parents were both at work with these high school boys in person.  We were only in the eighth grade, and they were juniors in high school.  When I saw them in person, the larger of the two fixated on me, a running back literally the size of my father.  I became very aware that, regardless of my dangerous attitude on the phone, I was really scared of the realities of physical sexuality at this age.

Perhaps it was the possible consequences like pregnancy that in my conservative culture would be dealt with in only a couple of terrible ways – violence worse than I’d already experienced or teenage motherhood and even more control. Perhaps it was the fear that my father with his abuse and inappropriateness would somehow sense he had a rival.  Whatever the reasons, I was overcome with fear when the request for sex was presented to me for the first time on my parent’s couch.  (It was summer; both of my parents were at work.)  Even though I was far too scared to give into his desires (and my own), the way the boy looked at me hopelessly entranced by my sexuality, not cuteness, as a drug that was very hard to resist.  Somehow I did.

All my wishes to be Grace Kelly dominant and glamorous as I aged and shed this  cocoon of cuteness to become a pale, long-legged butterfly have long ago been dashed.  I’m still 5’3.”  I wear the same baby doll wide face with big eyes that I had then (now with some wrinkles or smile lines as they say).  When I stay out in the sun too long, I don’t tan.  I freckle.  I still even get zits.

I’m never going to grow into Grace Kelly.  I will always have the aging cuteness of a Blythe doll – the wide face and big eyes of a doll crafted for only one year in 1972, the year before I was born.  They were dolls whose owners would never have to be content with one color of eye or position of pupil in their wards, a doll whose gaze could be controlled with a string. They became dolls rare and stylish after they were thought to be discontinued and cancelled by a toy company’s going out of business.

The Blythe Doll had a resurgence after over twenty years of being off the market with replicas being made (without the eye-color changing string.)  Fashion designers and photographers fell in love with the doll and brought her back into popular culture.  She’s a lesson in the staying power of cuteness.

I relate to this about the Blythe doll, too.  I became a poet and an internet sock model in my 40’s.  Most of my friends online are at least a decade younger than me and many a couple of decades.  I write mostly old-fashioned poetry (Shakespearean sonnets) with a modern twist in an aging body that somehow has more followers, readers, viewers of my leg and sock photography than I ever did in my entire life.  I was a stripper (a cute schoolgirl stripper in a club full of more traditionally sexy modelesque strippers) in my 20’s.

I was professionally cute then, but I never thought I would still be cute in my 40’s and that I would be okay with it.  I never would have dreamed I would be using my cute to be powerful in a world that I love more than any other community I’ve ever been involved – the poetry world.

In the poem above “I Was Blythe,” I write about a girl who puts herself in dangerous situations that echo the path of the Blythe doll from her execution in her early life to resurrection twenty plus something years later.

I used to want to be anything – do anything to not be seen as cute.  I wanted to have power.  I looked Blythe, but I was anything but blithe, carefree about my cuteness.  I felt powerless and unseen.  It was only when I grew up enough to understand I didn’t need to outgrow my looks but to embrace them.  When I decided to be what I am, cute, I became the most seen I ever was in even my sometimes very naked life and, in the ways that I care about spreading my voice and poetry and others, rather fucking powerful. 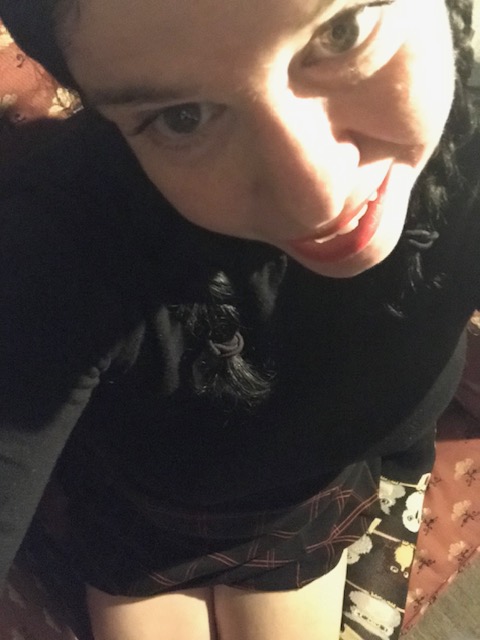 Kristin Garth is a Pushcart, Best of the Net & Rhysling nominated sonnet stalker. Her sonnets have stalked journals like Glass, Yes, Five:2:One, Luna Luna and more. She is the author of fourteen books of poetry including Pink Plastic House (Maverick Duck Press), Candy Cigarette Womanchild Noir (The Hedgehog Poetry Press), The Legend of the Were Mer (Thirty West Publications) the forthcoming Flutter: Southern Gothic Fever Dream (TwistiT Press) and The Meadow (APEP Publications).  Follow her on Twitter:  (@lolaandjolie) and her website http://kristingarth.com