A Believing Place by Nina Foushee 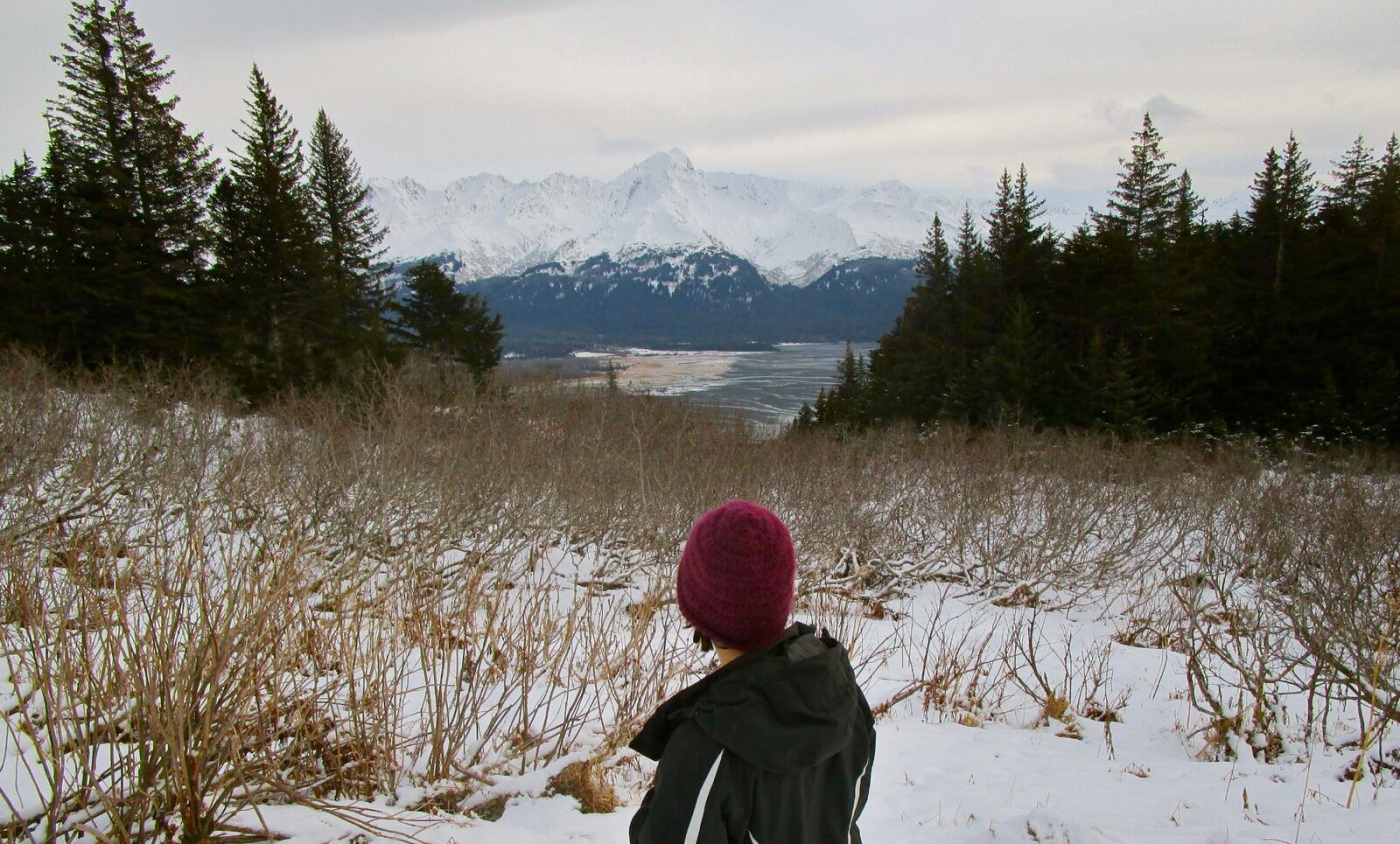 For months before going to Alaska, I thought about how six hours of daylight would feel. In California, I’d lay in bed and imagine the darkness as a hand closing around my throat.

When I first arrive in Seward, my host gives me a pair of rubber boots. They come up to just below the knee. I am told: wear these and you will look like a true Alaskan. In other places these boots are only for fisherman. The brand name is XtraTuf, but everyone here calls them tuffies: a tenacious breed of dog. Where I’m staying, there are no fences. Just houses dotting a sea of dark triangle trees and winter ground in shades of nearly white.

Alaska is in the mornings. Upon waking, I stumble over my boots to the window. The trees and mountains shed a long night bit by bit without even noticing I am there. I wake up and the mountains have always been awake, watching. Clouds nose against the peaks and morning gives the ridge blues a yellow cast.

Ice is a solemn uncle who wishes you knew how to play in his house. I tell myself: stomp on the ice patch to make it safe. Watch your feet every time you cross the yard. I slip so much at first that it feels like I am learning to walk again. When walking in the neighborhood, I try to listen for the sound of snow at different levels of freshness.

Dried stalks topped by flowers like skeletal hands dot the ground. They are called pushky, a word that implies some baby-hair texture they lack. Though they have none of the stateliness of trees, their wiry forms command respect. The mountains make being outside feel less like a conversation and more like being watched. In their presence, I am supplicant.

One of my first mornings here, I walk along the waterfront, where a couple has made a fire in front of their RV. I wonder if they come from a place where the pace is different, where there is litter and corner stores. The water spits out a sea lion, a dark mass barely distinct from the bob of an empty kayak. Later, I try the town’s only Thai restaurant, a place with jarringly shiny floors and an aquarium populated with neon fish. The bright of the fish and the spice is foreign. The check comes and I’ve forgotten the place outside. For this, the mountains speak harshly to me on my way out. This happens again when I get groceries that evening. Inside the town’s only Safeway, I am a massive presence. Outside the automatic doors, I look up from putting on my gloves and feel myself disappearing.

Everything here involves being a human who is trapped and small. This is part of the appeal.

My dad has always told me that rural life just has to die. It takes way too many resources to keep a person going in a rural place. When I talk to my friend from Alaska about this, I say that people could still visit, that the beauty of the place wouldn’t disappear. He tells me it isn’t just the place. It isn’t just important for people to see the mountains and the harbor and the birds that can dive into the sea and catch fish. He says that far away from everything is a distinct way of life, a way that people see each other.

The conversation has me thinking about Letter To A Christian Nation, the short atheist tract that says no form of Christianity is sustainable or even justifiable. All forms, from tongue-speaking Evangelicalism to the watered-down version practiced by my Episcopalian family, demand some complete buy-in. But I have never stopped being tempted by the offer to give myself over to something.

My host in Alaska says she likes to visit cities. But it is good to come home, where there is no threat from afar, nothing for which one can’t be prepared. The TV news is never about us, she says. And that is good.

“… far away from everything is a distinct way of life, a way that people see each other.”

At a bar in the two-street downtown, the bartender does not want to serve my friend because his I.D is expired. The friend tells the bartender he is class of 2009, Seward High. After he names every person in the bar, the bartender gives him his ambers.

The Seward newspaper tells us that someone got sick from contaminated seal oil. The Olympian from Fairbanks is visiting her family a few towns up.

The town’s only thrift store overflows with wool goods made for someone specific and absent. The glass case at the front holds costume jewelry which you ask about out of something like politeness. Rows and rows of swollen brown boots for daily life here, for snow. One little league hat and the t-shirt for a family reunion in 1997.

Something about Alaska beauty is Catholic. The drama of white, the demands snow makes. Everything is outsized and requires the right preparation. Each outing is a pilgrimage requiring a plan and three layers and tiny spikes that attach to your shoes. But there is something Protestant in the harshness, the conspicuous absence of a human hand.

In California, the Catholic students have a yearly ritual involving rows of homemade white flowers below a blue sign that reads: Remembering the Victims of Roe v. Wade. I walk by and feel like I am being spoken to from another world. The flowers stare out at passerby like prim starched ghosts.

The Catholic students are straight backs and urgent smiles. They are here but somewhere else. I want to follow them there, where life’s demands issue from a single clear voice. Across the street, my friend’s cardboard signs speak of bodily autonomy and personal freedom. I try to make my own sign but can’t stop looking out and across. I will not let myself want what they have. But I yearn to speak the way the faithful do when people pass by.

My friend, who was raised here, says he often doesn’t register California state parks and “wilderness areas” as real nature. The signs, the paved areas and carefully groomed trails, the uniformed rangers and the visitors with Ipods and industrial strollers: more like a museum about nature.

“I will not let myself want what they have. But I yearn to speak the way the faithful do when people pass by.”

I think of religion as a place. I imagine the Catholic kids, who got up early one morning to make a campus graveyard, as being perpetually far away. They are standing somewhere where the trees are different, and the summer is shorter, and where, to the West, there stands a purple mountain range that I have never seen.

The only high school in Seward has around 100 students. After reading Into Thin Air, the sophomore English class goes into the woods and builds an ice cave to sleep in overnight. They all remember that night when they move away to a place where people’s toes are always exposed. To grow up here is to be given a kind of religion.

When you come back to visit, the high school English teacher will take you salmon fishing. He lets you keep all the fish he catches. Over and over he makes a clean line down the belly and pulls out the guts.

What is important about Alaska small town life is not the place itself but how being in the place changes the way you think.

My digits go mute in the cold. I can rarely use both of my hands — I realise I have spent too much time in California. I am not from here but when I am peaceful the cold won’t knock me down. When it is time to go home, my host drives me to the Anchorage airport in the dark. As we approach, the mountains appear.

On New Year’s Eve in Alaska, I go to a bonfire on the beach. The whole evening I stand too close to the fire, then inch away. By the night’s end, I have tiny holes in my clothes. When I get thirsty, my friend drives me a few miles to the base of a mountain, where a lone spigot is staked into the ground. He has been coming to this spot since high school. He says — it’s always there and always fresh. I feel like I can drink for hours.

Nina Foushee is a writer, essay tutor and communications manager who loves absurdist comedy. Though she lives in San Francisco, she has an abiding love for the Sonoran Desert where she was raised. As a child, she wanted to be a rabbi. Now, she likes to explore how people use stories to live secular moral lives.

One thought on “A Believing Place by Nina Foushee”