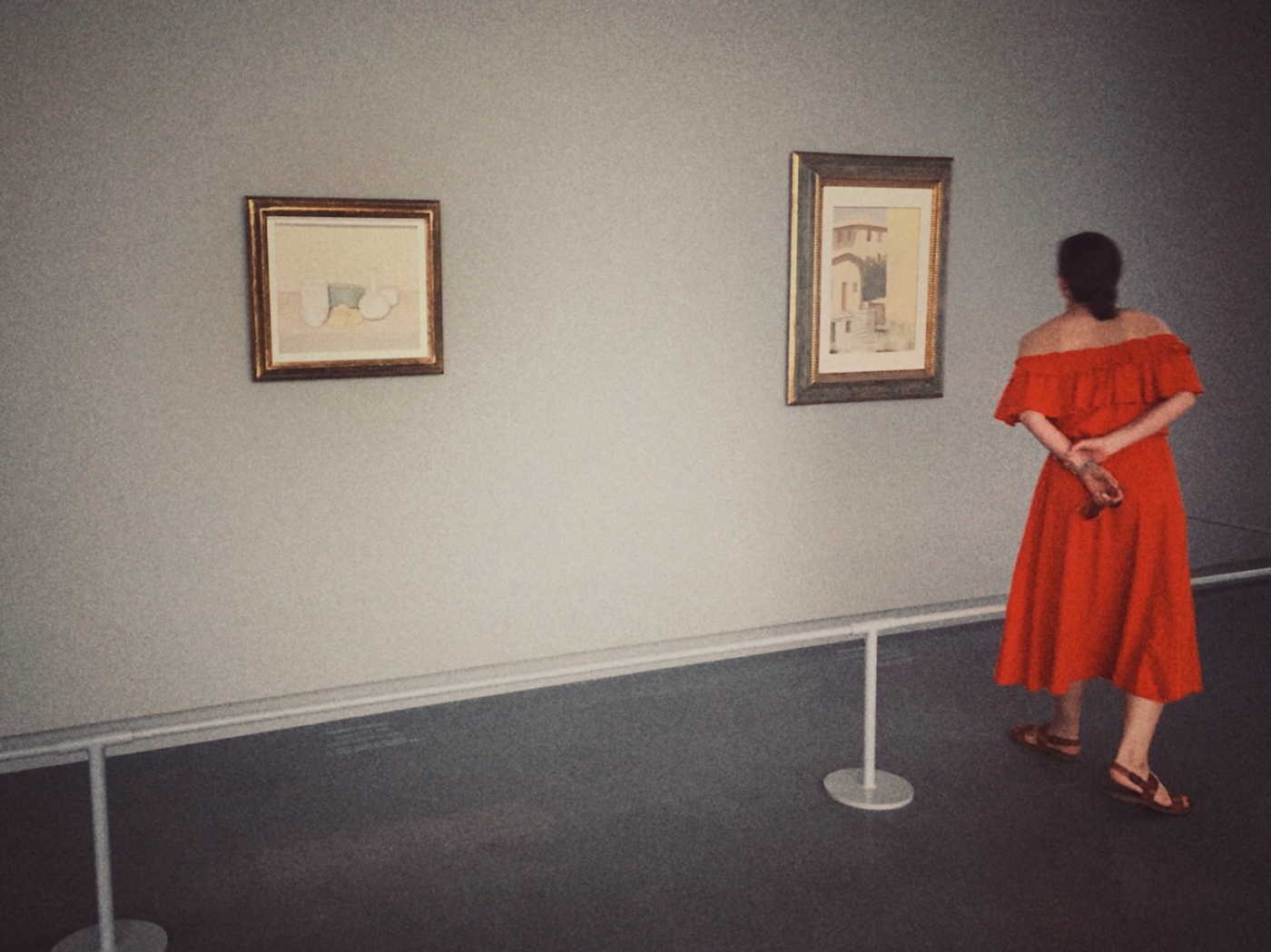 I realize how this obsession has gone too far. I’m on a bus cutting through Stockholm, it’s a smug city but easy on the eyes. I’ve dressed up for this. I’m on my way to see Morandi at Artipelag, beautifully situated in the archipelago. My expectations are high, feeling a bit too happy for paintings, a bit nervous. I’ve seen so few of his works in real life, only once before, and they affected me so profoundly that the big painting next door, some ceiling job by some dude named Michelangelo, left me cold and meh. I seem to have something at stake here.
And for this text, I will be Don Quixote de la Costanza.

Some of the images, from private collections, have glass in front of them but most don’t. I haven’t decided yet if I’ll steal one, but if I do, it’ll be one that is hidden behind glass. Their owners are probably criminals themselves and might be fine with collecting the insurance money. They’re likely to be mobsters like me and will know it’s nothing personal. Just business.
Anyway, I sometimes see my own reflection in the glass. It’s an obvious but accidental metaphor for a common way of approaching the world. Let’s call this specific iteration ‘the literary gaze’ – a way of treating paintings as if they were books, to be read. And in order to explain why I’m shaken to stillness by these paintings, let me spend some words juxtaposing them with another thing that they’re not: Photographs.

Photography is not creation but reduction. A way of psychoanalyzing the visual world, if you will. This may not be true for all photography but as soon as the photographer in any way, shape or form wants to tell you something, it is. Photography used this way becomes a mode of looking at the world as if it were an extension of one’s own personality combined with the engineering measures and algorithms of the camera tool. As if the peculiarities and intent of the photographer’s gaze would somehow coincide with the will and grandeur of the world. Photographers are the DJ’s of the seen and photography is the art form of the passively dominant. (Don’t be fooled: All humans are beings of dominance. That, as a general trait, is what separates us from the animals.)
The ’photograph with an agenda’ is not an image of the world but despite of it, produced to commodify the seen into serving the interests of its master. This is often a good thing – a useful tool. The photographer – in actuality – doesn’t express herself by making pictures but rather turns the world into a tiny version of his personal will. And the viewer, attempting to understand (read: ’read’) what the photograph says (represents) does the same thing all over again, only this time with the photograph. Both these external experiences, ’the world seen’ as well as ’the photograph’, are commodified and swiftly brushed aside by brusque and dominant creatures, both interested solely in seeing the reflections of themselves etched onto the external world. The vision seen, deemed too grand to pass by unphotographed, is diluted, echo by echo, intellect by intellect, into a catchphrase. Welcome to 2017.

I’m not surprised to read, in the exhibition brochure, written by Bo Nilsson, about an approach to Morandi in that manner. Nilsson mentions how the art historian Norman Bryson once made a case for Morandi’s art as feminist on account of his use of household items. The idea is that the items would have been chosen for the sake of investigating the male gaze on the female territory of the Morandi kitchen. I haven’t read what Bryson actually wrote, but if correct it seems to shortchange all of the involved – Morandi, feminism, the paintings – except for Bryson himself. He gets to tell the images ‘what they really are’, and ‘what they really are’ magically seems to coincide with him, with an issue he relates to and is important to the culture he writes from. I’m only pointing this out because it’s a good example of something we all do, all of the time. It’s a wolf in sheep’s clothing. We’re all fucking Freud now. And we see windmills and giants at the stroke of a brush.

The devil is in focusing on the details: A tour guide guides beside me about what a particular shadow has to say about the lightning. I never saw a shadow. And I don’t know what Morandi knew or thought about his work really, I’ve only practised art – never studied it in an academic sense – it’s evident, however, he knew his own nature, and that his nature is my nature too, and yours.

Morandi makes me cry. This is not style or formal exaggeration. Tears well up, I feel less alone here. I am moved to the point of nearly suffering. I have this kind of experience sometimes; in silence; in the forest; in the mountains; by the ocean; in music; in visual music; looking into eyes, etc. Amusingly, Natura Morta, the Italian term for still life, translates, word for word, to ‘nature dead’. The irony is a joy. In truth, there are no words for this. And that, for which there are no words, ironically summed up in words, is life in a state of being alive. It’s kind of a big deal, being alive, but it’s generally overlooked as the literary gaze is perfectly blind to it.

These images are beacons in the night. (That was not a metaphor by the way.) Enjoying Morandi isn’t obvious, however. A lot of people would label him ‘acquired taste’, which is the very opposite of true. When people tell me they find some art difficult to understand, I deduce they seek to understand it. Well, that can’t end well. These paintings begin before taste is even an issue, not to mention ideas of acquiring it. Enjoying Morandi is a bit like chugging beer. It’s all about relaxing, opening up and letting go. One need not be an Einstein to chug beer. Self-confidence goes a long way.
I’m essentially with them though. My patience for artists that demand my intellect before my present awareness is diminishing rapidly. My only hope is that my bitterness will be entertaining enough, come old age, so as to deserve some company. A humbly sized audience for my future artsplaining is all I ask for. If I ever get the consent to manufacture a child, my grandchildren will learn to hate this exhibition.

Morandi makes me laugh. Chuckles bubbling from the depths of me. There’s nothing original about giving your heart to Morandi. He has been an artists artist for decades and is no secret. I don’t know about others but for me, he’s the epitome of what I wanted to achieve 20 years ago. Sadly I did not paint, I was lured by the charms of photographic power and now I’m stuck in a failed marriage. It’s complicated.
Photographers are the idiots of visual arts. To be fair, photography is not even a visual category but a category of language. If that sounds odd, look at it this way: We don’t normally look at photographs as visual pleasure at all, we expect them to represent and to be symbols of something other than themselves, i.e, we expect them to do the exact same thing that we expect words to do. Graphics used to represent is language, it doesn’t matter if it consists of ’a photograph’ or a collection of black ’bugs’ on white background.

And nobody is a bigger idiot than me (and George Costanza); I spent a decade or two trying to use a category of language as a means of creating primary visual experience, images being imagery. But, like (written) words, a photograph is a graphic experience that is habitually used to point to another experience. Painting can do that too but it mustn’t. In fact, the liberation of painting coincide with the use of photography as tool of documentation. Painting was thus relieved of the duties of representation and I deduce Malevich at least partially owes his black square on white background to the invention of photography.

Morandi famously stated that “I think nothing is more abstract than reality”. Well, I for one, lacking his humility, am certain of it. And this is the quote that has me writing a text on Morandi juxtaposing it to the very antithesis of his work. Language is a means of definition by which must follow that it lacks the quality of abstraction. If language is truly abstract it is void of signification, in which case it is no longer language (but primary non-representative experience). If Morandi (and I) should happen to be correct in our way of seeing, language can only be real if it is meaningless. As soon as it signifies it leaves reality behind.

It appears, then, to be something in the primacy of experience that is lost in the representative (secondary) modes of expression. Let’s call it ’the actual experience’. Which brings me to the point. Giorgio Morandi never turned the world into a tiny version of himself. He saw reality and extended it through himself using his arms and some paint. This is why it’s more or less pointless to watch his paintings on the internet – those aren’t paintings but photographs: A category of linguistics. Something essential is lost in them, and ‘that’ which is lost in translation is ‘that’ which is life at its core. ‘That’ is what animates us. ’That’ is reality.

And brace yourself because here comes the moral of the story: No other generation that ever lived has been in such dire need to see this distinction than us, the now living. We are lost in ’the literary gaze’ and therefore blinded to ourselves. We need to change our ways and we need to do it from a foundation that is of reality. We are heading for bankruptcy and it shows in the affairs of the world. Another way of seeing is more important than any news item, any political agenda, any philosophy, any science. This is where changing the world begins. The subtle point that humans like Morandi spent their lifetimes of work to bring us into, is where life begins and from where it actually may be changed long term. All else are crosswords and puzzle in comparison. Morandi does not teach me about correct composition, lighting, how shadows fall, feminism or kitchenware – he shows me how to see; how to see life; how to see you; and not the least, how to see myself.

Art remains a matter of life and death. 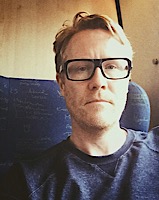 Fredric Nord is a writer and photographer living in Karlstad, Sweden. He enjoys basic forms of magic – like watching dogs run as fast as they can, the potential of charcoal on paper or the alchemy of a single violin emanating out of silence. His work has appeared in Phases Magazine, Phosmag, Mutantspace, Burning House Press and in print via Antler Press. Fredric is currently writing at length about vision as silence or poetry, and how it may be utilised as an act of love.