White Boy On The Bus by Michael Bennett 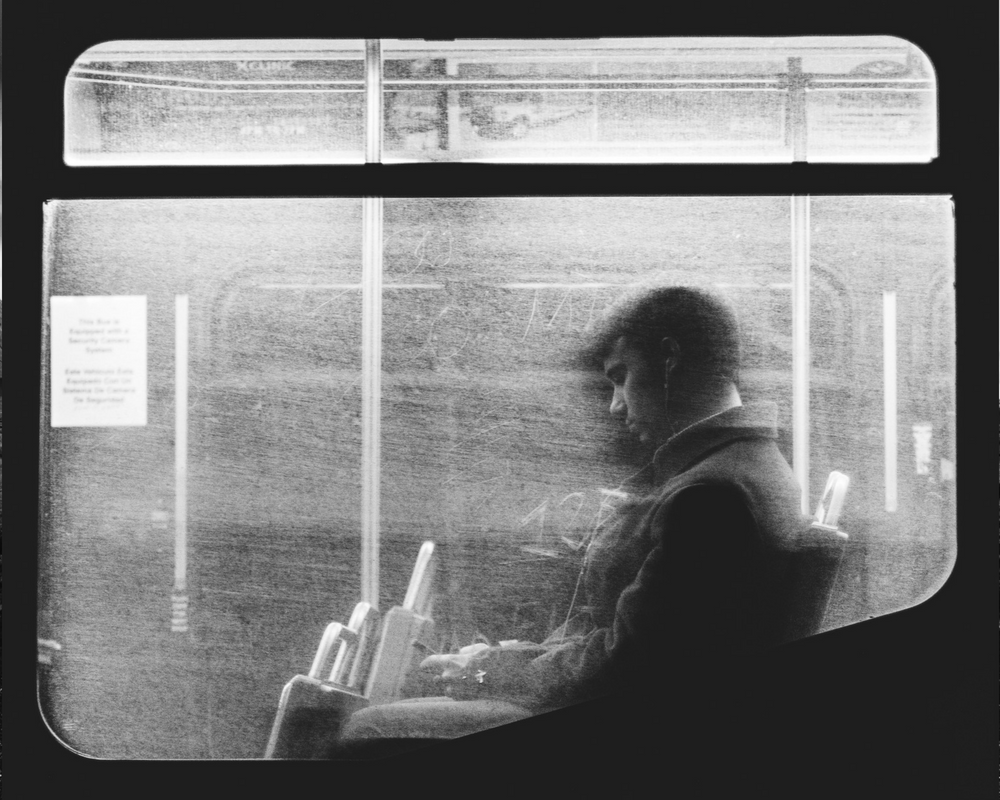 The thing about the 4 is, it’s always five minutes late. You tell yourself that, getting ready. You say: Mike, wait five minutes. But the thought of the bus passing makes every car outside sound like a bus, and besides: what if today is different? A new driver, a training bus, a holiday unaccounted. You leave early. Too early. No loitering at bus stop. No smoking. Caution. Watch your step. Have payment ready.

There is a man at the stop. White man, wrinkly, snarling. “This bus better come,” he says. “Back when I was a kid, this route had a regular driver. Every day, same guy. Now you don’t know who you’re gonna get.” Beneath his nostalgia, you hear this driver must be black. You have never seen this man before. You have taken this bus every day for the last two years. “It’s always five minutes late,” you say. You hope the driver is white. You wonder if that makes you…worse? You love this bus, you say to yourself, because there are so many different types of people. Old black women and young white hipsters. Mothers and children and grandparents, taking the family to the baseball game. Old yinzers like this man. “You know, you can track the bus on your phone now?” You say, and he almost doesn’t let you finish “I’m not gettin one of those smartphones. These days the whole bus has their phone aht. You used to talk to each other, back when I was a kid.” You aren’t sure if you like him less or more now. The bus arrives. The driver is white. You look back at the man—lips tight in a flat smile—not sure of what you’re proving.

You are being recorded. Assault of a public transit driver is a felony. Violators will be prosecuted to the fullest extent of the law. Stay behind the yellow line.

You sit in the very first seat in the back half of the bus, the one facing the large Plexiglas window. Sitting there makes you feel like a 7/11 cashier, or an airplane pilot, or a hockey player in the penalty box, depending on the day. The bus leaves Troy Hill, rolling past the old Heinz Factory, past the boys and girls club you went to as a kid, past the small patch of grass near the highway where one of the kids you went to that club with was murdered by a homeless man. There is a tree planted there. You’d forgotten about him, until now. You remember now, your mother, scared and worried about you, just around his age, roaming those same summer streets. You wonder if they would’ve planted a tree if that kid had been black. You wonder if Pittsburgh has room for that many trees.

A little further back please. This vehicle often makes sharp turns. No smoking. Pull cord to request stop. Do you suffer from depression?

A man gets on at the highway ramp, old and white, holding a bouquet of flowers and a shovel. He drops his shovel, paying the fare. He stumbles into a seat. A black man follows behind him, slides the shovel toward the man, sits across the aisle. While the bus dances down East Ohio Street, you look at the old photo shops, the record store, barbershops. You think back to when a woman in your class at the jail said she bought drugs on this corner. How she could never go back here. You are a resident and a tourist.

No open strollers. No radios. No food or drink. These seats are reserved for handicapped and disabled ONLY. A little further back please. Watch your step.

A blind man gets on at the Giant Eagle, blue grocery bags in hand. He rides this bus all the time, always standing near the front to chat with the driver. Today, with his groceries, he moves a little further in and lays them on the elevated square of space behind him, on a platform reading DO NOT PLACE ITEMS HERE. You laugh to yourself. The sign was asking for it. The black man says, “How much you want for them flowers?” to the white man across the way, so loud that the whole bus begins to listen. He takes out a brown paper bag and sips from a bottle, watching the flower man who is visibly drooling, head leaning over his stomach, still clutching the bouquet. “Hello!” The man says, with emphasis. “I said, how much you want for them flowers big boy!” He exhales the pained satisfaction of liquor in the throat. Flower man shakes awake. You pat yourself on the back for choosing this seat (not like, physically).

No littering. No smoking. Smile, you’re on camera. If you see something, say something. A little further back please. Are you pregnant? Are you a tobacco user?

“Here’s what I’ma propose to you, flower man.” You rejoice that the black man and you have christened this man with the same title. “We’re gonna go down to the liquor store, get me a big bottle of vodka, and I’m gonna give you some, and you’re gonna give me those flowers.” Flower man lets out a grunt. He still hasn’t said a word, only simple gestures that don’t imply any disputes. You’re rooting for the black man, you say to yourself. You question why you’re rooting for anyone. Why every interaction must be a win or a loss. The bus crosses the Andy Warhol Bridge. You picture flower man in a Warhol portrait. You paint him neon pink, bright green bouquet in hand, blue drool. As the bus touches crosses into downtown, you pull the string. It’s the first stop downtown, you say to yourself, of course the bus is stopping here, but you pull it anyway. You like pulling the string. It makes you think of the very first time you rode the bus with your mother, when she lifted you up and you reached and reached to grab the yellow cord, and ding! You walk past the man from the bus stop, past the black man still bartering with the flower man, past the blind man, all of them staying on for the next stop. You ask yourself what the blind man saw in his head as we crossed the bridge. You wonder if he’s rooting for the black man too. You have always known the bus as a rolling, rumbling ride of contradictions. You can’t help yourself, watching your city unfold around you, knowing you always will be, and always have been, just a white boy on the bus.

Michael Bennett is a 27-year-old writer and bartender born and raised in Pittsburgh, Pennsylvania, the city and subject he may can never escape. He recently graduated with an MFA in creative nonfiction from Chatham University, and continues to teach incarcerated teen and adult writers through Chatham’s Words Without Walls program.

One thought on “White Boy On The Bus by Michael Bennett”