The Breathing Body in the Act of Creation: A Writing Experiment 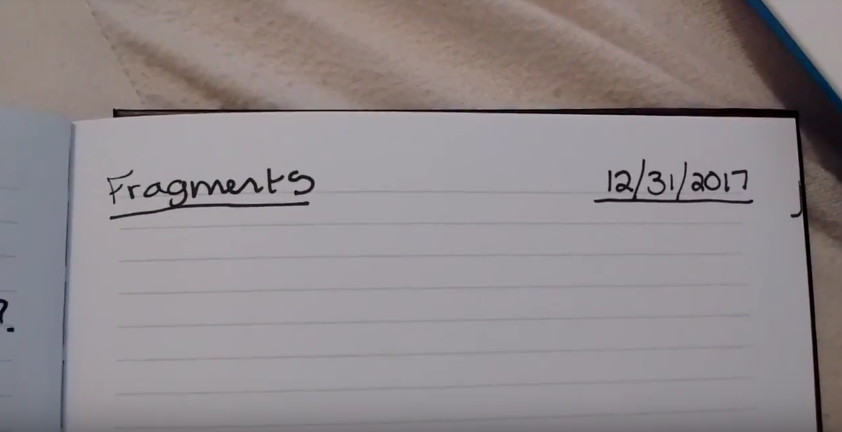 For much of my life, I’ve written in a journal. In the last few years, I’ve almost exclusively started writing fragments. I’m interested in the possibility of the form, how it allows me to write in a compact way, to capture sudden revelations and epiphanies, to acknowledge the limits of language within its very structure. Because of trauma, my mind has been changed, my way of thinking has been altered. I often describe myself as “shattered.” Fragments are the physical manifestation of that shatteredness. It is language that is in shards, but the accumulation of those shards creates a new form, creates a whole where there was once an absence or just random bits and pieces. As Muriel Rukeyser once wrote in “The Poem as Mask“:

Now, for the first time, the god lifts his hand,
the fragments join in me with their own music.

I see my own writing in that way. I am taking my brokenness and assembling my own ruins into something new, something that is still broken and cracked but alive. I view writing as a very personal act. I know other writers will have a different conception of writing, but this is mine. I want to articulate the wordlessness inside me. I want to speak the unspeakable. I want to write myself. I want to give voice to my alienation, grief, loneliness, fear, suffering, and trauma. I need to write these things not so that they will disappear or diminish–that is impossible–but so that I can bear them.

In speaking the unspeakable, I hope that someone else will recognize what they have felt or known and that they will then feel a connection to me. I want us to be bound together through language. To this end, I use fragments to explore my inner emotions and my unconscious, the things that are just below the surface that often seem beyond language. I wrestle with words. Writing does not come easy for me. I struggle with language, but language is all I have and the only way I can communicate what it is like to live inside my mind and body.

Often, my process is to write words and sentences as they come to me, as they appear. I write physically. I use an actual pen and paper. I do not type the words. I want to feel them coming out of me. It is sometimes trance-like. The words feel like physical objects that I am extracting from myself. I like to put on a song sometimes and just write what it makes me feel. Through this way of writing, I feel that I am touching something untouchable, that I am connecting with something both within me and beyond me. My writing method is intuitive, instinctual, automatic, and highly unconventional. The forms that exist are not enough for me. I feel that I must create my own forms. I must create my own way of communicating.

A few months ago, I wanted to show my writing process. I used technology to do that. I did a live session on Instagram. Holding a cell phone in my right hand and holding a pen in my left hand, I recorded myself writing for a few minutes. It was completely unplanned. What I wrote in that time was spontaneous and born in those moments without any previous thought for what I would write. It was a fascinating experiment that I’ve been thinking about ever since. I wanted to re-create it in a more constructed way, and so that’s what I have done with this post.

Why film myself writing? For several reasons. First, in the digital age, I’m interested in the physical act of writing and how it creates different possibilities than typing on a computer. While physically writing, you are holding the pen or pencil, you are forming the words on a blank page. Words are transformed into a kind of material, like paint. Writing can feel so immaterial, so intangible. By writing in a journal, I feel more connected to words and to the life of language itself.

Second, I wanted to capture the sensuous experience of writing–the sound of the pen touching the page, the sight of my hand forming each letter. The viewer can watch the creation of the letters and how they create words that then form sentences. You can see the flesh of my hand. You can hear the background noise in the room, the sounds that I hear as I am writing. You can sense the breathing body engaged in the act of creation.

Third, I wanted to take the viewer into the private and personal space of the diary where thoughts are expressed freely and spontaneously, without editing. Diaries and notebooks provide a liberating space where the mind can meander, where it can make errors and explore and feel no boundaries or limitations. Writing live and extemporaneously, I want to examine what is revealed when the unconscious is allowed to express itself. What is generated? What comes to the surface? Perhaps this exercise can inspire others to start writing more regularly in a notebook, if they don’t already.

Below are the live writing videos. I decided to use a two-part structure in this experiment. For the first part, on the last day of 2017, I opened my journal and filmed myself writing fragments that, for the most part, are connected to my thoughts about the end of one year and the beginning of another. For the second part, I opened my journal again and filmed myself writing fragments on the first day of 2018. I wanted to see how my thoughts differed, what thoughts would emerge about this transition from one year to another. None of the fragments were pre-written or planned. They were written purely in the moment as I filmed myself writing. They are an authentic record of my mind at one particular time in my life.

Note: It is best to watch the videos in HD if you can. It will make the words clearer to read as I am writing them.

What is time? I don’t feel time the same way as when I was a child. Back then, time was ahead of me. Now, it’s behind me.

Time is fragile, somehow unreal. I feel more unreal. I’ve always felt unreal. I keep waiting to connect with time, with my body, but it doesn’t happen.

I remember when 2017 started, and now it is ending. How can 12 months have passed? Where do they live inside me?

Where is every year I’ve ever lived? Where do all these memories go? Where does all this life go?

I want to forget and remember at the same time.

Another year to survive.

I want some peace.

I want to write myself.

The old year is just like the new year. My life never changes.

A loneliness beyond language.

I don’t write to heal. I write to endure.

I want touch. I want connection. I want care.

I want to be worthy of all this.

I want to be “together.” I’m always alone, separate.

I write to lessen my loneliness.

I write to escape the prison of isolation, to break down my own walls, break out of my own skin and live in vulnerability.

At the beginning of a new year, there is always mystery and longing. What will happen? How will we change? I feel none of that. I lost those things a long time ago.

I just live. I find a way through.

Caitlin is Nonfiction Editor for Burning House Press. She’s passionate about art house cinema and literature. You can follow her on twitter at @ekphora and on tumblr. She also has a film podcast called Her Head in Films.

One thought on “The Breathing Body in the Act of Creation: A Writing Experiment”