Just to let me know he’s still around.

He lies dormant like a bindweed vein in winter,

Watching for that glimmer of light

Anticipating his chance to make an entrance

If my days have been sunny, when the light floods in and I think that maybe I’m winning

He’ll remind me, that the light shows spiders in dark corners,

Nasty little secrets that have to be kept

From grubby to filth, from clean to obscene

From the dark side of life and all in between

In his presence or absence my brain has been scarred, on repeat, to believe he’s my master

When on days I’m too fragile, he’ll take the helm

He’ll lie on my chest to constrict my breathing

Block up the door to prevent me from leaving

Spin his cobwebs of doubt, my judgement affecting

With the devious lies that I’m always expecting

Infiltrating my mind so I can’t see clearly……..

I don’t want to

Convincing me that I’m worthless,

That I’ll never fit in,

That no one would ever understand me

Encouraging me to pick up the blade, just a little slice will help me breathe easier

Just to smooth away the rough edges

If you ask my opinion I’ll smile and I’ll say,

‘You just have to do it, you have to be brave

Make the changes you need and don’t be a slave to your Shadow’.

She wore those big boots for crushing dreams

Her sarcasm dampened ambition and desire

In a muddle, such a puzzle of miscommunication

Made it hard to understand

Any form of conversation

So we skipped it.

I should have questioned more

In a moment of distraction

While she swam in my detraction

Though in my kaleidoscopic view of distortion

I still knew that she was broken

But I presumed I was a token of her affection.

Although, I noticed a vein of disdain in the stories she told

Of those who had gone before

I simply blinked and it was gone.

The more I gave the more she took

Till I had no more to give

She drained away my power

Sucked my life force while I slept

Made demands on time as lovers often do

Now I patch her up with pieces of me

Till there’s nothing left of me to see, but her

A style that dazzles and gives the impression

She’s so much more than she is

I’m somebody else’s someone

I’m the secret that holds her together, who holds me?

Inside me there’s a tiny voice that screams ‘help me’

I need someone to lean on sometimes too

But they’re all too busy taking

They don’t see me breaking

To hide the fact that their empty

Till a fixer just like me takes up their case.

Fodder for the lacking

To give the aimless aim

Swallowed in a fog of nerves and indecision

While ducking the slings and arrows of false allegation

Like a splash of cold water to the face,

You can’t make your home in a person

And set up home for good.

So, I polish you to make a claim

You’re everything for all to see

While I concentrate on fixing you,

I don’t have the time to think of fixing me. 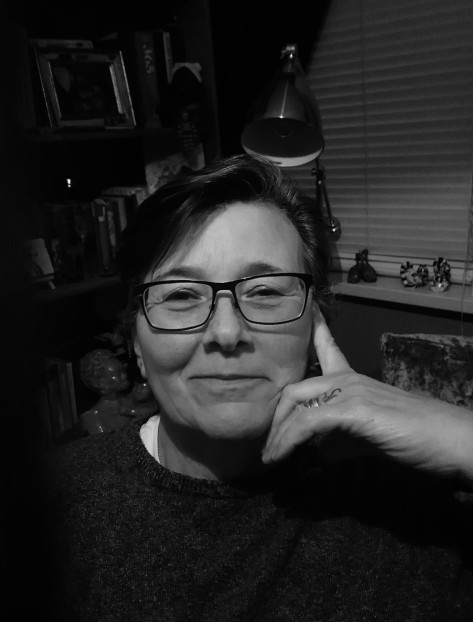 Artist and former chef Fay Deller is originally from the east end of London. After spending 10 years in the Algarve raising her daughters, she landed in Nottingham. As a constant scribbler, she was recently persuaded to share her work at a spoken word event. Thus a seed was planted.

One thought on “2 Poems by Fay Deller”