Rebecca Bird’s first poetry collection is a fierce, accomplished and empowering call to find your own identity.

What makes one writer different from another? As much as any poet is unique and their writing is particular to them, they still work within (and out of) forms and conventions.

For me, all writing bears the fingerprint of its author’s character, even though we are often using the same building blocks of language – and this is what I find most inciting and insightful in Shrinking Ultraviolet.

What if the personal identity remains elusive and slippery through the typical adolescent turbulence and on into adulthood? Writing is so much self-creation – seeking clarity in the face of obfuscation – or to further mystify the “real” you – it could still be said that this is some kind of a journey towards. Throughout most of Shrinking Ultraviolet, Rebecca struggles with others ability to accept or to understand her decision to embrace a change of gender and what is natural, honest and feels true – the solid foundation on which to lay your feet.

From the first poem, Golden Gate, the severity of the challenge is laid bare:

The fireman reaches out his hand
and doesn’t know:

that the water is my long-distance lover,

and will rush up to meet me,

Throughout the book there are painful stabs of memory and sleights that the author has carried with her, the barbs of arrows from an offhand comment, a lingering look of examination or the sickening lurch that persists after a painful confessional. They are all re-presented here in deft lines of passing incident – where Rebecca’s poetry is strongest – she underlines the importance of the incidental – I was struck by several lines that haunt the poem, -Violet:

the lump in my throat [please be still]

is an Adam’s Apple

I hear that faint and lovely cough

The book has an empowering sense of having overcome much of the most difficult passages which have helped to forge the poet’s identity – and though it can often seem bittersweet – the poet’s resolve is heartening. There are no apologies offered here, just a declaration of intent – this is me, take me as I am.

The touching ending to the poem, Stacey, casts a definitive image of what is at stake when a person feels trapped enough that they cannot fully or openly express what they are feeling:

she finally threaded herself,

The boldness of the book comes from Rebecca’s refusal to talk around painful issues of depression, and the rigours of talking therapies and medication which take their own toll. The tone is often direct and challenging without being purely confrontational. On a technical point, I love the poet’s  invention and experimentation within the traditions of form (a constant tension in poetry that I often find is hard to pull-off really well without trying too hard). Clandestina takes the repetitive rhyme structure of the sestina and staggers it into the cyclical chain of cigarette smoke lingering and bodies lurching from bar to bar, drink to drink, that brilliantly illustrates the inevitable downward spiral of a heavy night out:

me, they don’t hear my breathing.

They drift in the quiet;

this icefield of drunks

The book’s title is beguiling but provocative, playing with the near-coquettish image of the tragic figure forced into social obscurity – ultraviolet light being invisible to human beings – but far from being the “wallflower” of the book’s description, Rebecca’s poetry is testament to the power of self-preservation, in holding on to your own idea of yourself.

There has not been much poetry on the very topical questions of gender identity which are only now beginning to come to the fore of public consciousness – but ‘Shrinking Ultraviolet’ is a bold step towards standing by your own choices, sometimes in the face of aggression, judgement and a patent lack of human understanding.

Find out more about Rebecca and her work here 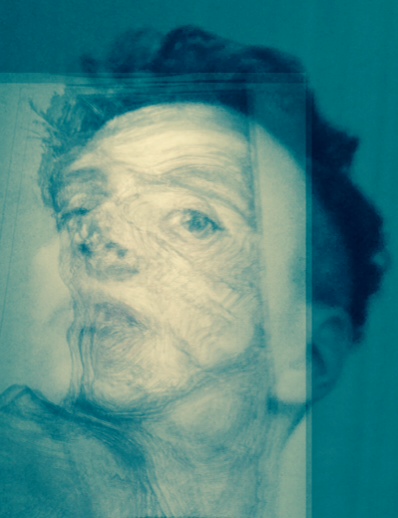