An Interview with Heidi Saman 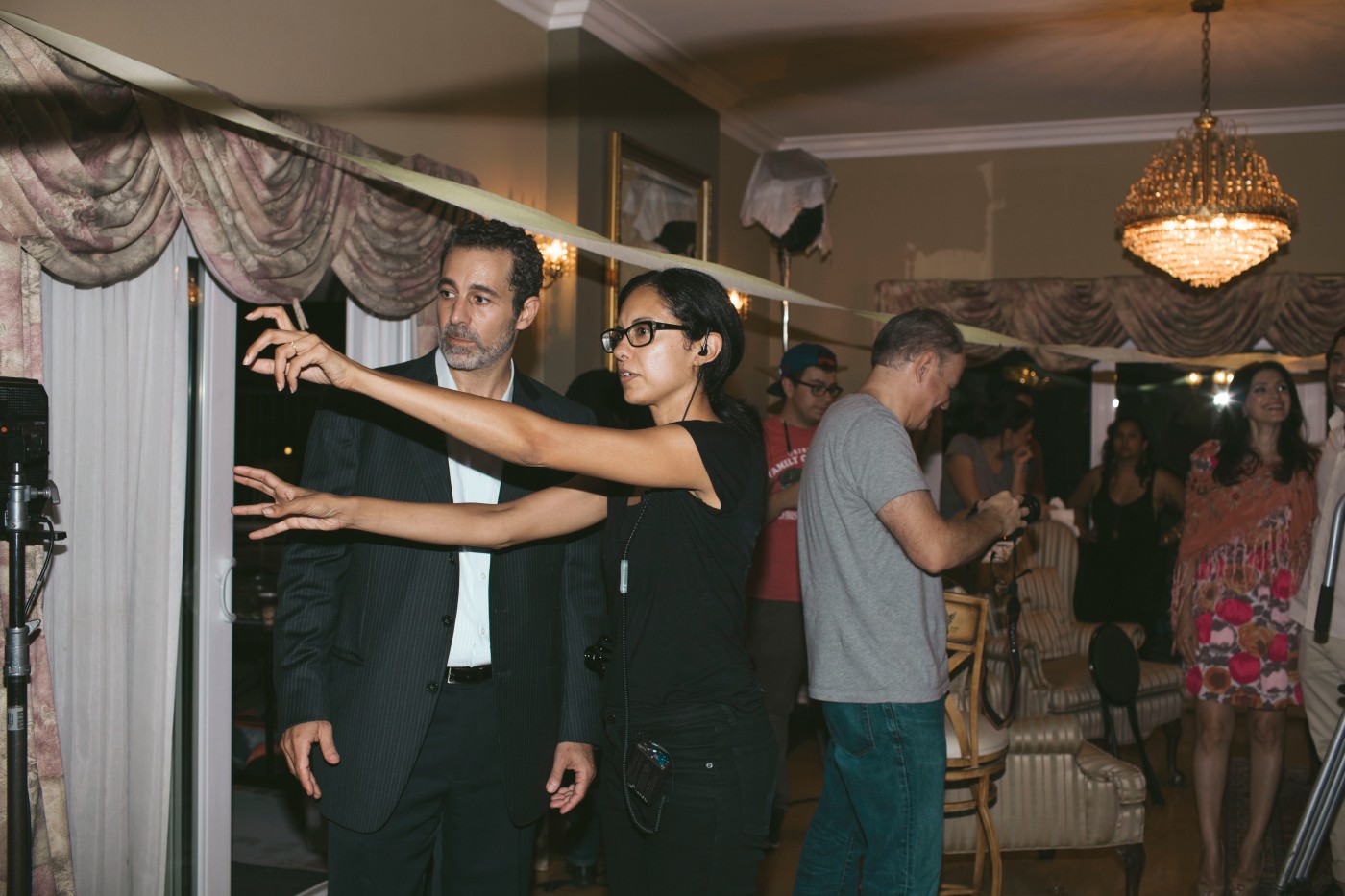 By chance, I met Heidi Saman on tumblr, where she curates an excellent blog about cinema. Along with working as an associate producer for NPR’s Fresh Air, Saman is also a gifted filmmaker, who just premiered her first feature film, Namour, at the LA Film Festival to rave reviews. Namour explores the existential crisis of an Arab American man working as a valet driver in the aftermath of the 2008 recession. Saman was kind enough to take time out of her hectic schedule of promoting Namour to answer some of my questions. Our conversation touches on various subjects, including racism in Hollywood and Saman’s cinematic inspirations.

In your own words, what is Namour about and what does this film mean to you?

Namour is about the decisions we make when our responsibilities begin to weigh down our convictions — and why life can feel like it’s passing us by.  I wanted to make a film about feeling stuck. I felt stuck in a very particular way in my 20s and I wanted to visualize what that felt like.

You said on IndieWire that you started to write Namour after the 2008 recession and that you wanted to “understand what the ‘American Dream’ means” in the modern era.  Very few films have been made about the recession. Why was this subject so important for you to explore? Ultimately, what do you think the American Dream does mean at this time in history?

I was thinking about how my parents, who are both from working class families in Cairo, Egypt and emigrated to the United States in 1970, worked really hard and eventually made their way to the middle class. I thought about my generation and how that trajectory doesn’t seem as possible in this day and age. When the recession in 2008 hit, I was struck by the fear of job security, losing homes, and reconfiguring big life decisions and I was also aware that this fear could drive one to do desperate things. There were some rich ideas in that desperation and that was the jumping off point for the character of Steven.

I think the American dream is being re-evaluated right now. Owning a house or a college education doesn’t mean what it meant in the 70s and 80s. I think the American Dream is going to a take a different direction, hopefully looking inward instead of these external signifiers.

Your film also centers the experience of an Arab American. At a time when Hollywood and even independent cinema offer very few nuanced portraits of Arab Americans, how did you set about resisting the stereotypes that are often reinforced in the media? Do you think your film is an antidote to those negative depictions?

I just made a film that was true to myself and my background. I didn’t set out to resist anything. It wasn’t until I tried to get financing to make Namour that I realized I was resisting some good old fashioned Hollywood racism. I just tried to tell an honest story and that’s what we need more of in cinema — more stories and more people telling their stories. That’s what I want.

You set up a Kickstarter to gather funding for Namour.  What was that experience like? Would you do it again? What do you think about the alternative channels of funding that people are turning to in order to create independent cinema?

Crowdfunding was one of the hardest things I’ve ever done as well as one of the most beneficial things I did for Namour. I ended up finding more investors through the success of my Kickstarter campaign and I found a community of people that already wanted to see Namour before I had even made the film. I was overwhelmed with the kindness and support that I received from the campaign. I had this idea that crowdsourcing was akin to begging, and I didn’t want to do that. But the process of creating the campaign forced me to articulate the type of film I wanted to make, and helped me package the film, which is strange to do before the film is even made, but is so important to do as an independent filmmaker. I think crowdfunding is essential to truly independent cinema because it’s hard to find funding for films that are made for less than a million dollars.  I would do crowdsourcing again, but it will need to be more ambitious because my next project is a lot larger in scope and has a bigger budget.

The process of making Namour was easier in some ways than making The Maid, despite it being a feature film, because I had to adapt to the Egyptian way of producing films.  For example, film crews in Egypt tend to be larger and there’s a lot more bureaucracy. There was so much I didn’t know about how films are made there, so having an Egyptian producer, Islam El Azzazi, was essential.  Making Namour was harder in the sense that it was the largest crew and cast I’ve ever worked with and there were so many cars to direct and maneuver.  As far as what I learned making Namour, I’ll just remember to always channel the motivation of why I wrote the scene in the first place and direct the scene with that motivation in mind. Things get stressful on a set and it’s important to take a moment to just sit with the scene before fielding questions from the assistant directors, actors, and production designer.

According to Filmmaker Magazine, the Italian Neorealists inspired your short film, The Maid. Is it fair to say the neorealists sparked your interest in film? What is it about their work that you find compelling?

The neorealists totally sparked my interest in film!  I found the ordinariness of their stories so compelling and beautiful. When I saw The Bicycle Thieves, I saw a struggling Italian family that could have been Egyptian, Japanese, American.  It floored me.  I also liked that many of the filmmakers of that time were forced to make films outside of the studio system, because the studios had been burned down after World War II. I think great art often comes from those kinds of limitations and boundaries..

What filmmakers influenced you as you directed Namour? Is there a specific style that you were going for?

Films that inspired Namour were Antonioni’s L’avventura for the way it cinematographically captured solitude, the photography of Malick Sidibe, Mad Men, Ousmane Sembene’s Black Girl, and the spirit of Fellini’s La Dolce Vita. Style wise, the filmmaker that permeates several of the frames in Namour is Yasujirō Ozu. There are a lot of still frames and meditative wide shots and I wanted these kinds of shots to capture the stifled feelings of Steven.

Why did you become a director? What do you believe about cinema and its place in the world, in our lives?

Directing is something that found me. There’s no one in my family that does anything related to cinema, but I’ve always felt compelled by how images are put together and how a certain combination of images and sounds has the potential to emotionally stir. I think cinema is a mirror and it marks the passage of time like no other artistic medium. It tells who we are and who we were. It also has the capacity to be timeless and of the moment.

I enjoy your tumblr very much. You post quotes by directors with accompanying images from films. How has social media allowed you to engage with cinema and the film community? Do you think social media deepens and enriches our relationship with cinema?

I think social media can be an incredible tool for enriching our relationship with cinema, but we have to use it in a conversational way. So much of social media can be focused on writing mean comments, or bullying,  and I think if it’s used as a tool for actual engagement and to foster real conversation, it can be incredible. I’ve found several wonderful cinephiles on these social platforms (like you!) and for that I’m so grateful.

You work as an associate producer for Fresh Air, hosted by Terry Gross and broadcast on NPR. Radio and film are so different. What has it been like working for a radio station? Do you have some favorite interviews by Terry Gross?

I love working for the show. I’ve been a fan of Fresh Air for many, many years so to work here is a dream come true.  I work with an incredible staff and I get to be immersed in the land of books, films, and current events. I also love editing, which is my primary job at the show. It’s a skill that serves me well in writing scripts and my tumblr posts. As for favorite interviews, there are too many! I’ve loved Terry’s conversations with Toni Morrison, Meryl Streep, and Walter Mosley and most recently her conversation with Christopher Eccleston.

If the house is burning, and you can only take a few films or books, what are they and why?

Oooh this is hard, for films I’ll take Agnes Varda’s Cleo from 5 to 7. For books, oh goodness, I’m reading The Days of Abandonment by Elena Ferrante. I was stricken with Ferrante fever after reading her Neapolitan series, so I’m now going back to her earlier works.

Who are some current filmmakers that you really love and think are creating compelling films?

What is next for Heidi Saman? Do you have anything in the works or are you just focusing on the present and the success of Namour?

We’ll see! I want to take Namour to more festivals and I’m thinking about the next script, but I can’t say anything about it just yet! 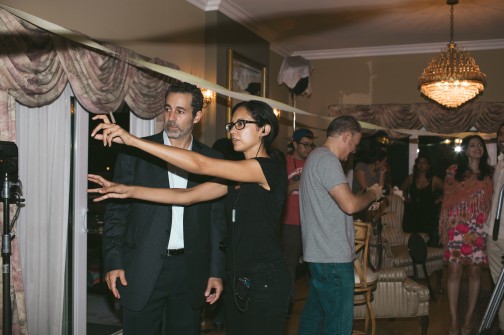 Heidi Saman was named one of Filmmaker Magazine’s 25 New Faces to Watch in 2014. Saman attended the University of California, San Diego where she studied World Literature and Gender Studies. Upon graduation, she moved to Cairo, Egypt where she was a freelance journalist for The Cairo Times News Magazine. Her short film, The Maid (il Shaghala) premiered in competition at the Cannes Film Festival in 2008 and went on to screen at numerous festivals worldwide, including Dubai, Slamdance, and IndieMemphis. Namour, her first feature film, won the Jury Award at the 2016 Los Angeles Film Festival, where it premiered. Namour was developed with the Sundance Screenwriters Intensive Workshop, was the recipient of a Panavision New Filmmaker Grant and a Knight Foundation Grant. Saman is a 2016 Pew Arts and Heritage Fellow and she is currently an associate producer for NPR’s Fresh Air with Terry Gross.