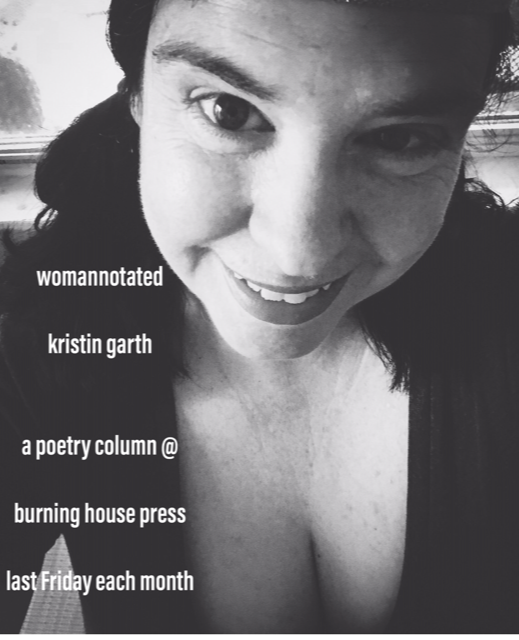 An Ancestral Love of Boyish Bees

He recognizes painted eyes like green
irises mythologized over a decade and
a half ago — the speckled girl, sixteen,
he used to know — acquainted, where you stand
in her place, in your hand replica, bisque,
familiar face, unblemished cheeks, unbloomed
by his demonic lips. Lunar eclipse
of 1898, a blood red moon
illuminates a ginger effigy,
inside your fingers, prophesy, he
should blossom soon another speckled cheek -—
and there is yours, alone, alive he sees,
with her effigy, 1883
and an ancestral love of boyish bees. 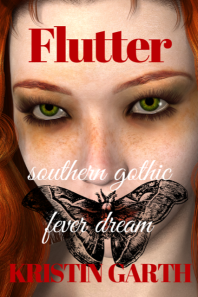 Annotation (and introduction to the universe of Flutter: Southern Gothic Fever Dream):

Fiona Dandridge was one of two lemon tree foundlings discovered on Longleaf Estate in Pensacola, Florida in the year 1883. With her sister Fey, the blonde infant was discovered swinging in a basket from a lemon tree by the invalid adolescent daughter of the Dandridges, Sylvia.

Sylvia was born to financial privilege as the child of a successful lumber distributor. This privilege did not extend to her health. Sylvia Dandridge, since infancy, was plagued with a litany of health problems from her delivery with a double nuchal cord.

Contagious disease was on the cusp of being recognized properly and greatly reduced in its reach. However Sylvia Dandridge was born at a time in history where the concept of contagion and the need for sanitary practices was still not understood completely by even the medical community. The Dandridge’s doctor, R.B.S. Hargis, M.D., was ahead of his time in his personal belief in the necessity for quarantine. During Sylvia’s bouts with both yellow fever and scarlet fever, she was isolated much and left to her imagination for comfort.

The Dandridges were also isolated by geography. Desmond Dandridge, an ambitious northern transplant to Florida during the Reconstruction period, had acquired 3,000 acres of undeveloped land thickly populated by Longleaf pines whose wood was as useful as its sap which was was turned into turpentine for waterproofing ships. The incredibly tall, skinny pines were widely abundant in Pensacola, a plentiful resource he planned to utilize to support a family. He built his residence in the center of these 3,000 acres and filled in a crater with water from Escambia River to create a pond he would deem a lake, Lake Desire.

In 1883, having survived the deadly yellow fever and many other illnesses, Desmond’s only child, sixteen year old Sylvia, developed scarlet fever. Per Dr. Hargis’s instructions, Sylvia was quarantined. Scarlet fever was a dread disease, the largest killer of children at the time of the events of this story, Flutter: Southern Gothic Fever Dream. Among the symptoms were rash and spiking fevers which, for Sylvia, were accompanied by dramatic and, sometimes disturbing, fever dreams.

Sylvia’s dreams were often rooted in a piece of reality. She once believed she was being attacked by rabid swans who ventured up from Lake Desire while she rested on the veranda. Though the servants of Longleaf Estate assured her that this occurrence was a fever dream she never believed them. Sylvia was afraid to be on the veranda again.

Then there was the great mermaid massacre for which Sylvia could never forgive herself. Her father Desmond was a great believer in bedtime stories. His own father Winston Dandridge had participated in this ritual consistently with him as a child. Desmond traveled often selling his lumber and was not as present as his own father had been. It was for this reason he decided to create a living bedtime story that would be as ever present and accessible as he was not.

Sylvia Dandridge’s favorite bedtime story was The Little Mermaid by Hans Christian Andersen. During the relocation of water to Lake Desire, Desmond Dandridge had seen the flip of a tail of one of the giant catfish (40 plus pounds) that called to mind the mermaids of Sylvia’s story. He insisted his workers fill Lake Desire with such catfish to populate her imagination, if not actually the lake, with mermaids. Desmond was certain from Sylvia’s balcony vantage point of the lake and her bountiful imagination, she would see them as mermaids. He was correct.

The men had warned Desmond the relocation of these enormous fish was foolhardy. While titularly a lake, Lake Desire was very much a pond and deficient in the oxygen these catfish needed to survive. Sylvia enjoyed the mermaid show outside her window — bequeathing names, biographies and hierarchies to the catfish mermaids. One she appointed queen and named Thora.

It was all exactly as Desmond hoped until one morning Sylvia awoke to a terrible smell and then the sight of dead catfish on the banks of Lake Desire. This was hardly., though, her last vision of this half-piscine population. Sylvia now saw the mermaids in their spectral form swimming in the sky often — a school of vengeance with a target, the Dandridges who they blamed for the massacre, even Sylvia herself.

She spoke often to the servants of these beliefs in murderous mermaid ghosts and rabid swans as well as another common refrain — she did not have scarlet fever. The rash on her face and the physical transformations her body was undergoing was a blooming after being kissed by a young boyish bee demon. It was an outlandish story that no one believed but, like the others, wasn’t argued with too much to keep the sick child calm.

So when Sylvia Dandridge told the servants of Longleaf Estate she spied babies in a swinging basket from a lemon tree, at first she was not believed. Miss Adena, who cared for the child and spoke softly to her in agreement with her wild assertion, didn’t even bother to look in the direction of the lemon tree at first. When the child persiste,  she did and was astounded to notice there was in fact a basket and what appeared to be movement of something inside.

Two lemon tree foundlings were brought to the house and cared for by the Dandridges, towhead baby twin girls. Sylvia named these children Fiona and Fey. As she was very sick and had a doctor who had instructed everyone in the household on his notions of contagion, she was not permitted close contact with the children. As the children’s presence, even far away, cheered her, they were brought to visit her room and be seen from afar. These moments were some of Sylvia’s favorites at the end of her life.

Sylvia Dandridge passed away in 1883. The two lemon tree foundlings live on the property still, at the time of this poem  “An Ancestral Love of Boyish Bees” in 1898 the night of a lunar eclipse. The two twins are sheltered and isolated in their remote geography and have parents who don’t really pay attention to them. They cling to each other and share a bed and all their experiences until this fateful night when Fiona decides to have a private experience.

Fiona waits until late, after her twin is fast asleep, to escape, for the first time, to experience the lunar eclipse and the blood moon. It’s exciting but frightening to go into the woods so late alone. For companionship, she brings the head of Agatha she has custody of this week (after an arrangement in which the twins split weeks with the doll head that once belonged to Sylvia Dandridge.) The doll, having bisque hands and feet but a cloth body, was dismembered so the cloth could be burned with all fabric Sylvia had contacted during her scarlet fever.

Agatha, the doll, purposely was acquired because she resembled her human benefactor Sylvia Dandridge. As she wanders into the woods with Agatha, Fiona hears a cacophony of bees. As she draws closer to the collective buzz, though, she only sees what appears to be a boy around her age. His attire and mannerisms seem more old fashioned, anachronistic as he approaches the young girl. He stares at Agatha intently, transfixed, at first, as if he recognizes the doll and then into the face of Fiona as if he were making a decision.

Despite the strangeness of the circumstance and his otherworldliness, Fiona finds this stranger in the woods handsome and enchanting. She is so delighted, though perhaps nervous, she was brave enough to seek out her very own adventure and that without any objective it ended with meeting a very striking, unusual boy.

Fiona has no idea that Etienne, as she will come to know him, is the invention of Sylvia Dandridge, her own benefactor who saw her in a basket as an infant and gave her a home, along with her sister. He is the boyish bee demon Sylvia created to explain what was happening to her as her body changed due to scarlet fever. A demon, hundreds of years old, who takes the form of a teenage boy and has preyed upon animals, young women for kisses that bloom their lips and faces into flowers that die and are reborn with seasons. Etienne cannot bloom the dead which prohibits him from kissing the malicious spectral mermaids, already so angry at the Dandridge household, including Fiona and Fey (though they have no idea why.)

Fiona was born into a story she did not invent, and she does not know its rules. She has no idea the peril she is in encountering another character, invented as well, who desires a kiss, an appealing idea, on the surface, but an idea with grave consequences. She has no idea of the mermaids lurking in the trees already so angry with a new grievance (gray ghosts deprived of their mermaid coloring covetous of the blooming powers of Etienne).

She is a character born into a story in progress through the fever dreams of a sixteen year old girl. The story outlives the girl who invented it, the way that special stories do. The conflicts she created, as their architect, govern this world, and Sylvia Dandridge, though fifteen years in the grave, not Fiona or Etienne, is its monarch. The world of the woods of Longleaf Estate are as much hers as when she created them — while her eyelids did still flutter.

Flutter: Southern Gothic Fever dream will be published by TwistiT Press, an imprint of Twist in Time Magazine January 2020. 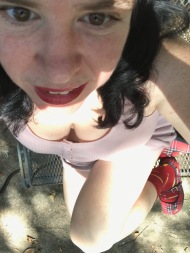 Kristin Garth is a Pushcart, Best of the Net & Rhysling nominated sonnet stalker. Her sonnets have stalked journals like Glass, Yes, Five:2:One, Luna Luna and more. She is the author of thirteen books of poetry including Pink Plastic House (Maverick Duck Press), Candy Cigarette Womanchild Noir (The Hedgehog Poetry Press), the forthcoming Flutter: Southern Gothic Fever Dream (TwistiT Press) and The Meadow (APEP Publications). Follow her on Twitter:  (@lolaandjolie) and her website http://kristingarth.com