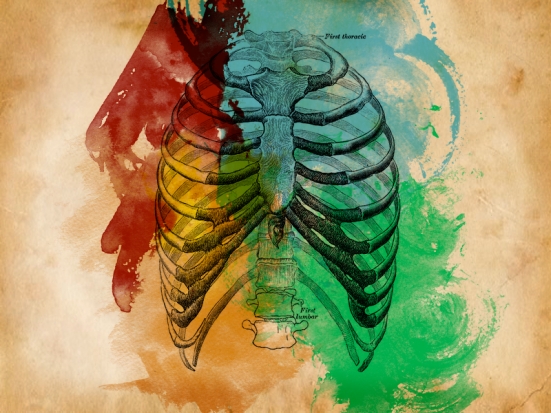 The magician saws a woman in half and pulls a rabbit from her ribcage, soft and twitching and wild. It is all done with mirrors. I look in the mirror. I press my breasts down to become more like myself.
Houdini’s metamorphosis began with his hands tied behind his back because
he was about to become his own wife.
I tell my secrets to the icicles that do not grow from my body. I freeze myself within a block of ice for sixty-three hours and am born again blue. I can never pull on the sack’s rope to loosen it but I
climb into the box without disturbing the straps.
All the observers could see in the cabinet thought lost to time was a darkened interior. The occupant absent. The divided performer is always revealed to be in one piece.
No one except a magician could hold their breath so long. No one except a magician could walk pierced with knives.
Contrary to the audience’s assumptions it was not Houdini who clapped thrice. I want to slip out of the straightjacket when no one is looking,
with room at my chest.

Kayla Bashe is a queer disabled graduate of Sarah Lawrence College and proud cat parent. Their poetry has appeared in Strange Horizons, Liminality Magazine, Writers Resist, and Cicada, and their short fiction has appeared in The Future Fire, Mirror Dance, and Resistor Vol. 2,  among others. Their website is https://kaybashe.wordpress.com/. Find them on twitter at @KaylaBashe.