It was a surprise to see the danger red, tango orange, white mottle. All the other shellfish she had seen that day in the rock pools had been dark browns, some black elegant creatures. This was a lobster that looked like it was half-cooked, but alive and well, a naturally appealing dinner invitation.

She felt like a child squatting down next to the rock pool. How had he got washed up here, so beautiful against the wrinkled rocks and sighing sand. The day, sunny but with a wind that ran through her ankles and up her skirt occasionally, should have been about observing. She thought she would spend some time looking at the rock pools, looking at the creatures in them, grey and black and brown—crabs moving amongst the husks and wrappers of their dead comrades. Never take a step back, pick up claw from a fallen brother.

She was going to be detached today, she’d promised. She wasn’t going to get involved with anything, she said the creative writing course was helping, but there needed to be more material, more distraction. She’d been told by the tutor that she was a natural journalist, scornfully. Always ready to get involved and meddle in someone else’s story, rather than secretly skimming off the best bits from a distance.

So she would observe today. It was a bit like when she had been dumped by her boyfriend. Ex-boyfriend. The idea was to stay single for a while, to observe the others doing the dance and check she knew the steps.

But here, with this orange lobster in the black bowl of a Welsh rock pool, she decided to engage with it. She started by giving it a nudge with a stick to see how active it was. It was beautiful, so could be dead. It moved and whirled around to look at her, pointedly. She was surprised, and didn’t expect it to be so forward, it was a rare thing and therefore should be shy in her world.

She didn’t know why, but she put her hand into the pool, beneath the water, to see what it felt like. It let her touch its large claws and playfully snapped at her—if it was playing—it was a game. She would poke at it and it would dash around in the pool with flicks of its tail, trying to pinch at her, a little grip of the claw on a withdrawing finger. Pain, but not unpleasant. She enjoyed the little nips that the creature gave her, they were thrilling. She might lose a finger, she thought, but the idea of thinking it and knowing she probably wouldn’t was part of the fun. Eventually she let it pinch her, and it was gentle, then rougher, then rougher than she expected and as she decided she didn’t want to play with the rare lobster anymore, and drawing her finger out she felt the lobster grip with a big claw, refusing to let go.

She withdrew the finger and the orange-red creature came with it. There was a storm coming in from the sea, she could see the black funnels out and down to the water twirling their way over, lazy ballerinas.

She gave it a shake, she gave it a chance to let go by putting it back in the pool. It wasn’t hurting her much, but it was constant. It looked at her as if to say that it was coming home with her now, that the game should continue for a little while longer. It would be dark and wet soon, and she would be able to reason with it on her own turf, she thought. Surf on her own turf, she thought, and laughed—and the lobster asked what she was laughing at, and she said it didn’t matter, and it seemed to sulk a little before squeezing a little bit harder in a way that she felt herself going slightly mad. So she told him what she laughed at and he said that was cruel and didn’t speak to her on the bus on the way home—despite the fact that she paid for both their tickets. Although, it might be fairly argued, it would be unreasonable for him to pay for a ticket, as he was a rare lobster after all.

At home, after the silence of the bus ride, him sitting on the sofa next to her in a washing up bowl, waiting for her to pour a can of tuna in—which she had to go out to get—she reflected that maybe it was her fault. After all, she had been the one to start playing with it, to start the game, to let it hurt her.

He asked her to put something else on TV, this was rubbish. It was what she liked, but she decided it didn’t matter. The bus ride had been very long—an hour maybe to get to the sea, an hour to get back. The lobster looked worried, and she thought it must be hard to be so far from home. She had brought him here, so she might as well let him relax for a little while. The lobster took to being comfortable.

In the lobster’s better moments it told her about itself—he was one in thirty-million, very uncommon indeed, and that life was hard being so delicious and rare. She tried to talk about herself, but he said it was evident. She slept with her hand in the bowl of salt water as it griped to her. She found this life less strange by the minute and the hour. She went to work and it was hardly commented on. It wasn’t their place, obviously, and she went to her creative writing classes and no one seemed to notice there either, it was a kind of fiction to them she supposed because everything was.

Her finger stopped hurting, or rather: the pain became so normal that she only felt the lobster’s weight occasionally on long walks, or when she did something that deserved a squeeze.

She felt like she did have some kind of love for the lobster, he was beautiful and rare after all. But she was worried about his habits. She would sometimes wake up to find him posting rude things on message boards online about women, and she’d often look at her computer and find the browsing history had been deleted. He wouldn’t let her see his texts, or anything on his phone. No, not even the passcode for emergencies. She was worried about him, he wasn’t reaching his full potential as a lobster and she felt like she was holding him back in some way.

On a lazy Sunday morning in bed, the lobster in his bath as they called it, their little joke, and the kind of light you can only find on a Sunday creeping in amongst all the gaps. The lobster said that she should come meet his parents. They were at a French restaurant by the coast, not too far away.

She was happy to, she said, and they dressed up for dinner but only went to the lobby to meet the parents in the tank at the front of the restaurant. She felt very silly for the way she acted, these were very posh lobsters, his mother was worth more than anyone could afford at the restaurant that had ever visited. She’d made jokes about being in a pinch, snappy responses and whether he could be Santa Claws one day—being almost the right colour after all. These were considered very bad taste. Despite this he comforted her on the bus ride home. He could be kind sometimes and he understood how difficult his parents were.

Later he asked for them to move closer to the sea, so that he could experience a little bit of his old life. When she argued, the pinch got tighter and eventually they were looking at new flats on Rightmove. She thought that maybe she did owe it to him, to help him achieve his potential as a lobster.

She picked him up and told him that she was going to make some soup. She got her biggest pot and filled it with water and placed it on the hob. She cut up vegetables, random ones really. Leek, potatoes, spring onions. He criticised her choices as she went, and in some ways he was right because you don’t need leek and spring onion in a soup. She got the butter out of the fridge and placed it nearby, and a large plate. He asked didn’t she want a bowl, and she said he was right, and cut up some lemon and put it in a bowl with some cold water. He wasn’t paying attention now, which was perfect as the water came to a boil.

She only scalded the end of her finger and the knuckles when she plunged him in. Her finger bright red, like him, soon ready. She was still grateful for the experiences they had together. And really, he was still trying to teach her things. She imagined his slightly cruel voice instructively saying: “you have to take a long knife to get to the best bit of meats, use the back of the blade to crack the claws.” 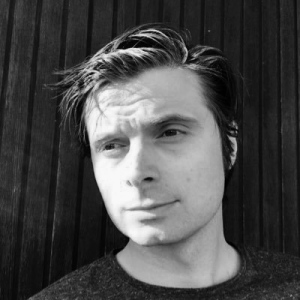 Christopher John Eggett is a poet, writer and runner trying to live close to water. His work has previously appeared in The Creative Truth, Lit.Cat, and The City Quill. He writes Etch To Their Own, a literary newsletter that he will send to you on a Friday. Chris lives in Northamptonshire and can be found on Twitter as @CJEggett and on his website: http://cjeggett.co.uk/

One thought on “The Boyfriend Pinch by Christopher John Eggett”