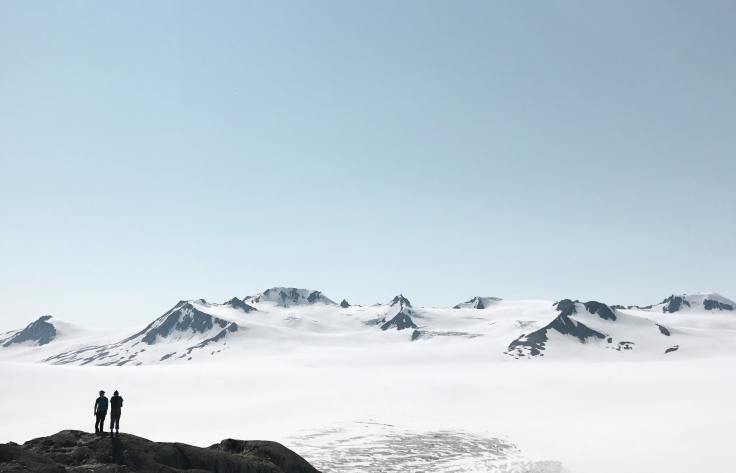 Photo by Cam Fattahi on Unsplash

He’s been on two journeys in his lifetime. Firstly, Antarctica. With his son, Mark. Arriving by air, setting out (despite all the warnings), saying to the seventeen year old boy, We must take our first reading from the coastline. Mark saying, How can we do that? It’s covered in a billion tonnes of ice.

Of course it matters. If you want to be accurate. If you want to find the right spot. You do, don’t you? (Because his father had been obsessed with this pole for years).

So the father found a spot, planted his pole and said, The cliffs are directly beneath our feet.

How can you know?

He didn’t reply. Just smiled, and started trekking in the direction of the bottom of the world. Walked over pack ice, crawled over crevices, measured their coordinates every hour with a range of Russian-made instruments (as Mark referred to the GPS his father refused to acknowledge). Days and days, just them, a sled, food, a small tent and him (the father) settling every night to write in his journal: At the perfect moment, I’ll know. Exactly where. Something will happen. A blue ice, cheesy-coloured moment of grace. Then mumbling, I’ve settled on 85˚5̍ S 65˚47̍ E.

It makes sense. Look at these instruments. Hand-ground lenses.

But that’s all he said. Slipping into his sleeping bag, into his own pole of inaccessibility, and snoring.

Don’t believe all that electronic rubbish. What’s it good for?

The second journey was simpler. Towards Point Nemo. As with the Southern Pole of Inaccessibility, this was the point in the Pacific furthest from any land, or people, any thoughts, or songs or books or ideas. Any countries, mountains, lakes or beaches. The journey took the form of the father (who’d worked in sugar refining his whole life, done nicely, saved up enough to buy this thirty-foot yacht, presently sailing towards 48˚52.6̍ S 123˚23.6̍ W) and, again, ten years after the journey to the South Pole, his now 27-year-old son. Mark wasn’t accompanying his father because he cared about poles, but because he (and his mother) cared about their dad’s, their husband’s, delicate mental balance. They’d tried to talk him out of going but he’d said, No, I have a reason this time, and this time (looking angrily at Mark) we’ll be successful.

So there’s father and son, heading west under a big blue sky with a sharp, once-in-a-lifetime, never-to-be-repeated offing, the father filleting a fish, Mark studying his device and saying, There must be a reason. His father replying, All in good time. Mark saying, It’s unlikely we’ll find it. His father saying, Wait and see.

Eventually they arrived at Polyus Nedostupnosti. An old hut, and a bust of Lenin, facing towards Moscow. Mark signed a golden visitors’ book and below this his father wrote: My whole life I’ve continued to move away from people! They tasted a selection of Sputnik-era food that was still edible. Biscuits, corned beef. The father turned to Mark and said, We’ve done it!

Great (he was too cold and tired to care).

His father said, How does it feel?

How should it feel?

Back on the yacht, ten years later, the son said, I wouldn’t have blabbed.

That’s not the point.

We could’ve said we’d made it.

Not according to this. Waving his device in the air. Another three miles. The Russians were wrong.

Cookson got there first!

Are you going to help, or just sit…sunbathing?

Now, Mark didn’t say a word. He never did when his father was like this.

As per all those years ago, sitting at the Russians’ table, reading their maps, their yellowing magazines, using a sock to block a hole in the wall. Mark said, It can be trusted. It uses satellites.

No reply from his father. As distant as any unclaimed or claimable pole. And those who said they’d made it were lying (they both knew). The coordinates were only in people’s heads. People who wanted to go somewhere that was special, sacred, scientifically-perfect, measured, precise. Mostly because they couldn’t go to a similar place within themselves. But this didn’t mean the geographical pole was real. Which made their dilemma (when they realised it) even worse.

Back on the boat, the father looked around and said, This is it.

How can you be sure?

The father just smiled at Mark (like he’d never done before) and said, I just know.

That’s what you said in Antarctica.

And you’ll come with me, won’t you, to China, South Dakota, Mato Grosso, Obo, Papunya?

Mark looked at his device and said, This isn’t Point Nemo.

Yes, it is (surveying it all).

How can you know?

And to his son. I’ve spent a lifetime practising, see.

By this, Mark guessed his father was saying, Practising to recognise, to feel, to know when I’m further away from anyone, any place, any time in the living years, or beyond. His father, he knew, had suffered one of those gruff, wordless, fuck-the-world fathers, and he’d spent his childhood, his adult life, navigating around him, without ever docking, exploring the terrain. This search repeating, generation after generation, until the not-knowing became its own goal.

So Mark shut off his GPS. It wasn’t needed. It didn’t say anything that could help anyone.

His father said: See, it’s happening. Rubbing his legs, his flat, wrinkly, Costeau-style belly. He shook his arms, jigged a bit, then said, Let’s see what happens. And he jumped into the water. Mark wasn’t sure if he was going for a swim, or trying to finish himself off.

It was always hard to know with his father.

Stephen Orr is an Australian writer of short (and experimental) fiction, and novels. He has a small, and unpredictable, readership.