Thanatos, My Lover, by Alex Amos 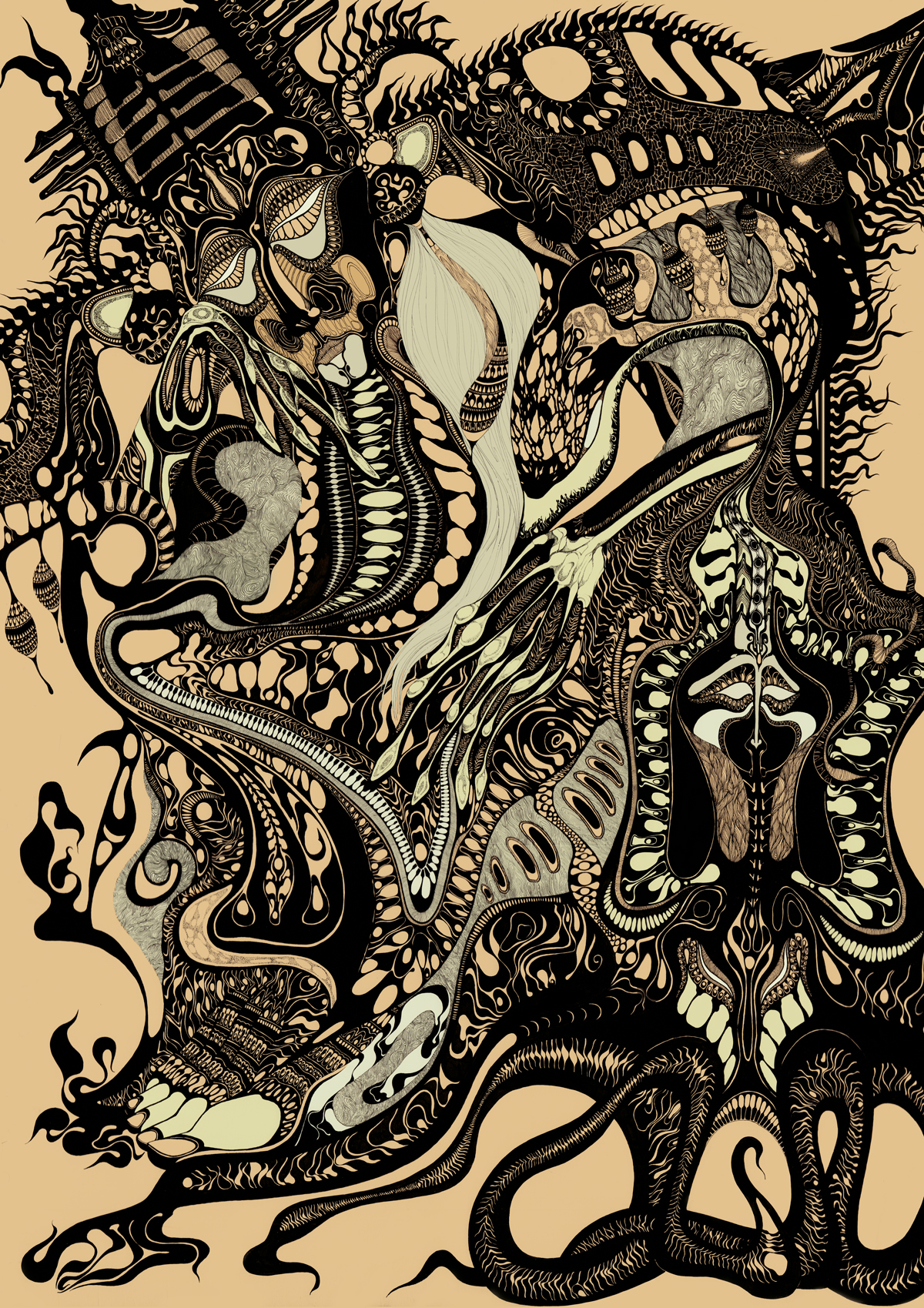 Human beings have a proclivity for interpreting their experiences through a dualistic lens. Maybe it has something to do with the hemispheric structure of our brains; or perhaps, it’s simply because we’re stimulated by the novelty of contrast. Whatever the reason, we can be certain that since time immemorial we have sought to make sense of the world through binary models of interpretation. Binaries act as information filters by simplifying complexity down to its most essential elements; also, the bridging and combining opposing differentials can potentially stimulate new avenues of creative thought. If they are given over to representation, binaries perform a symbolic function by embodying multiple information sets within a unified aesthetic.

The author C.S. Lewis spoke of us as being essentially amphibious creatures, in that we comprise both an animal side which operates in the world of time, and a spiritual side which belongs to an eternal realm beyond time.

Sigmund Freud, the founder of psychoanalysis, echoed this in his own way when he theorised that in order to escape from our original trappings in prehistory, we had to control and repress a host of our primitive instincts and drives, and this is what ultimately enabled us to create civilised society. However, even under this new arrangement, primal forces still circulate behind the veneer of polite appearances, making the creature of metropolis a peculiar breed of sophisticated savage.

Religious systems can also be seen as operating through a dual lens in the sense that most religions seek to address issues on the polar dimensions of human experience – especially those that pertain to the sources of creation and the possibility of life’s ultimate destination after physical disintegration. Such concerns form an integral and universal part of the human experience, and we have been exploring them since the first primordial images were cast upon the subterranean canvases of our prehistorical memory. However, the ways that we have addressed them has varied greatly throughout history, therefore, if we observe the manner by which a specific culture apprehends and transmits these primary concerns, we can discern a great deal about the nature of their experience in time.

Such an assessment, I feel, is highly pertinent to our current age in the early throes of the 21st century; since we are, in many respects, living through a period of civilisational transition. The widespread feelings of anxiety and uncertainty we feel today primarily stem from the fact that we are travelling between two points of historical integrity. One represents the image of a world already formed, and which is currently undergoing a process of disintegration; whereas the other represents the unstable image of a world still in the stages of becoming. Under this transitional tide, the binary forces of creation and destruction have saturated our cultural consciousness, festooning our days (and our dreams) with the dual residues of moribund decay and an intense yearning for other worlds.

As a consequence, we are surrounded by a culture of contrasts. On the one hand, we have become unconsciously fixated on death, which prompts us to feverishly manufacture solutions that speak to the phantasies of youth (Peur aeturnus) and immortality via a Faustian pact with robotics and artificial intelligence. However, we also find ourselves in a restless state of libidinal excitation – a ‘cyborgian’ decadence – facilitated in large part by the reality that culture creation has now gone open source, which enables millions to directly program the cultural architecture and engage in an endless alchemy with their social identity. These fixations are just a small part of the overall pattern that has come to characterise a world in flux.

In many respects, the West represents the ultimate thanatic civilisation. Since the dawn of modernity in the industrial revolution we find ourselves increasingly preferring the inanimate to the living. Technology has become the new metric by which we measure human advancement, and in our art we celebrate lifeless machines as heroes.

In the most technologically sophisticated societies on earth, we also notice a marked decline in sexual activity, embraced by populations whose social strategy has deteriorated into an alienated senescence, with a remote, virtual style of interactivity compared to the intimate, authentic alternatives.

Even seemingly positive developments such as the resurgent trend of environmentalist activism is pregnant with a death-like impetus. Whilst on surface appearances, its proponents advocate for the preservation of natural life against the perceived threat of destructive forces, these gestures belie, at their core, an unconscious infatuation with death – revealing itself through an apocalyptic narrative of global annihilation. We can also notice, in its most vociferous expressions, a nested misanthropy which imbues the paternal instinct to preserve and protect with a destructive vitalism – the apocalyptic phantasy energises the motivation towards organic prosperity via the sublimation of human life beneath all others.

Phantasies of apocalypse and extinction often arise in societies that have nearly exhausted their creative possibilities, but for us, they also offer another purpose. Organised displays of mass resistance are our iteration of religious festivals; they allow us to incarnate and ‘act-out’ the passions, anxieties and dream-life of our age through a culturally sanctioned type of collective drama. In fact, contrary to the misguided notion that we have largely outgrown our proclivities for religious expression, I would summon that we are likely the most religiously hyper-charged population that has ever existed; since through our emphasis on technology, we have augmented the rate by which libido can be satisfied and transmitted into comparatively religious models. It doesn’t take much exploring to see this in action: if we turn to our relationship with media figures, we notice a reverence, sometimes bordering on hysteria, for strangers who we mask in the psychological coating of divine beings. In the age of consumer advertising, symbolic transference saturates our public consciousness, informing our lives and decision making, and even finding its way into our dreams. Therefore, it is not so much that we no longer take part in group ceremonies, engage in symbolic thinking, or submit easily to states that we would commonly associate to cult religiosity such as ecstasy or fanaticism, it is simply more accurate to admit that these behaviours now re-articulate – and energetically so – through new vessels.

It is said that at the heights of its fervency, the Aztec civilisation committed tens of thousands of human lives to ritual slaughter atop of blood-drenched pyramids. Whilst it’s easy for moderns such as ourselves, dissociated from the influence of dead cosmologies, to point out the error in believing that bloodied hearts might have been required for the sun to keep on rising, nonetheless, this limited reading obscures a serious appreciation of the role such collective dramas play in sustaining the overarching meta-narratives and cyclical behaviour patterns all societies rely on to sustain their organisational integrity.

The modern West’s ‘master ceremony’ – as it were – is how we engage in sensationalised spectacles of consumer fetishism as a replacement for the ancient veneration of natural forces. And regardless of whether people want to admit it or not, money represents the new spiritual currency of our time, just as human blood and hearts did for the Aztecs. Yet for all its ritualised violence, the Mesoamerican cosmology was still orientated towards the preservation and continuity of greater life, whereas our ceremonial indulgence in consumer products commandeers and channels the libidinal energy of creative beings towards a pantheon of dead gods.

So, in essence, Freud was right – civilised society does exert an influence over our primal drives, but in reality, changing societies do not merely repress them, as create the new outlets for their transmission. The only thing that’s altered under this new arrangement is how we have migrated from a pattern of veneration toward the living, to the lifeless.

For human beings and their societies alike, death is, and always will be, the inevitable destination. It is that ‘other’ sun whose dawn never fails to rise on the horizon of our uncertain futures. As we migrate through the existential deserts created by instrumental reason we can feel its heat, persistently apprehending the embrace of its invisible influence. Battling through the inner-emptiness, we discharge libido with abandon into the formation of countless surrogate projects. Hand in hand with our lifeless offspring, we journey together towards the final binary: extinction and rebirth. 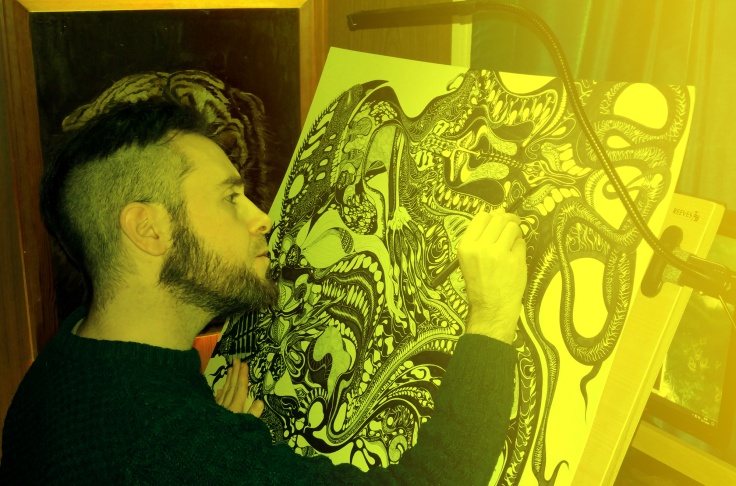 Alex Amos is an English artist and author of an upcoming multimedia book project titled ‘Red Dawn’, scheduled for release in late 2020.