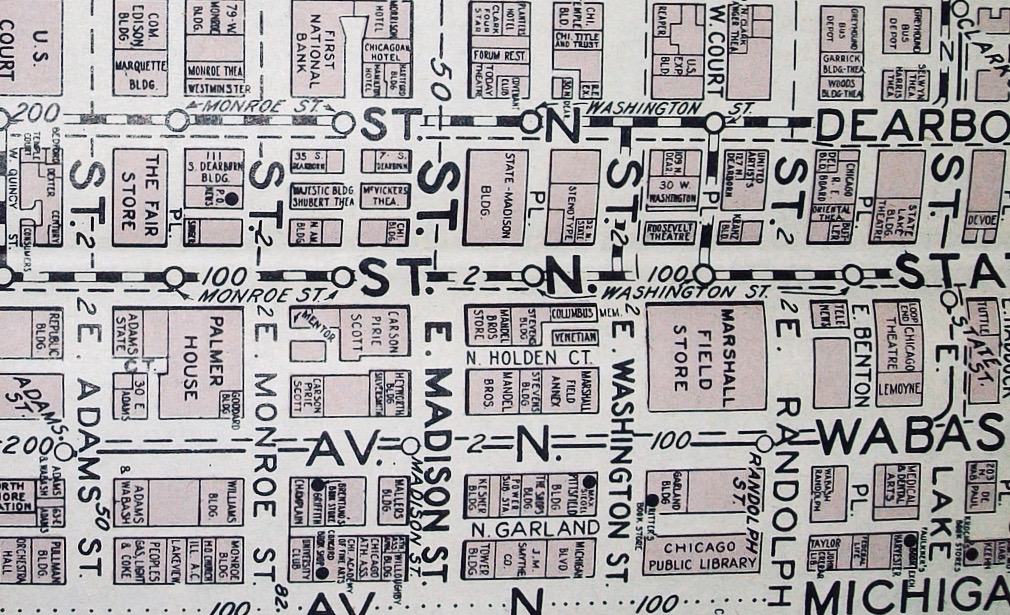 The new vice principal, politely giving us
this tour, must know. We are more of those people.
One of those classes for whom the abundant good fortune
of this school, back
then, was restricted from her
kind.
Returning here, an aging classmate was canvassed:
“Were you one of those Bogan Broads?”
And there it was. The rub.  The reason
I don’t live here anymore, not anywhere even remotely
close.  So close. You can find it in the books
by Ta-Nehisi Coates. Between the red lines
that warned realtors where NOT to rent
or sell to your parents
if they were black
or brown.

The Bogan Broads,
no, that’s not what our Mad Men fathers called us,
nor a nasty nickname for our cheerleaders
nor those other girls found messing round
the park at night. No!
The broads were our mothers, the mothers
of our friends, women with white hands
that served us cookies after school, sewed
fab outfits fueling jealousy
each birthday season,
hosted sleepovers – never knowing
who had snuck the booze in or whether we would blow
that popsicle stand and skedaddle
in our jammies and curlers to the nearest pay phone
to intrude into the lives we crushed on
to the point of death back
then.  Still they thought we were safe.
Maybe only tempting fate, at most,
with a Ouija Board.
Even Drivers Ed they could handle. But
sharing our high school
with darker skin? No.
It would not stand.
Privately
the community called itself,
this school,
the Great White Hope.

It took another decade
and a half from the day
the very reverend Dr. King dared step
into manicured Marquette Park to address this
inequity,
surrounded by
the Chicago Freedom Movement; assailed by
a rock
from the gnarled hand
and crippled heart
of someone’s Lithuanian grandmother.   A decade
and a half from the summer of well-groomed
protest marches
down my old neighborhood streets.  Fifteen years
before Carla Bailey, our very own Ruby Bridges, braved
the bright white halls and Bengal murals of Bogan High.
Another year before a dozen
others followed. Before the buses
brought those wide-eyed kids to elementary schools
that would “feed” them
Into the tiger’s maw. Bombarded
by the broads, those buses,
by loving mothers, now rage-faced, screaming
at tiny children
unknown to them, cursing crimes not committed.
Someone’s mommy waving
a noose.  Someone who once comforted me when I fell,
set fire to an effigy of a pig-tailed child.
The mothers wave
signs with slurs and shout shout shout
shout those words we would never
get away with saying in our homes…or theirs.

We still hear some proudly claim that name – the Bogan Broads.
Wrapped in the red-faced white man’s blues of their legacy
like a Confederate flag. Celebrating
the boycott that followed arrival of these children.
Removal of their young to private schools; for those who could,
exodus to suburbs of the affluent.

So now, fifty years later, there is a new pale
population mixing the palette of multiculturalism
at this school:  Rebranded
a tech school, it now attracts Hispanic kids
whose parents check the white and non-white boxes
on their census forms, though who aren’t counted here as “white.”
And Asian students, especially
the Chinese – would they qualify to the Broads as white?
Fifty years ago, no one had a problem with the Chins who owned
the Chop Suey shop across the street.
Just one family.  Not enough tiger mother influence
to bust the curve
and fill the stage
with top performing students. No threats,
those bright and jolly Chins.  No tiger bite
in old Bengal halls.
But now, among the “whiteish” population, the Broads
would still find weeds to rail against:
those passable folk
with long messy locs, of mixed and, of course,
dubious parentage – the ones unsure
of what to do
with that little box that boxes them in
by race.  Or all those A-rabs and
children of unpronounceable
immigrant groups. Refugees
or not, these foreigners have usurped what some say
should have remained
“A neighborhood school for neighborhood kids.”
Where once we named the profusion of portable
classrooms
Willis Wagons
for the man who tried to soothe
those saber-toothed parents and keep
their Baby Boomed children
in their overcrowded schools
rather than bus them into older black locales
with falling enrollment,
today
the percent of unhyphenated white students
here now hovers
at just one percent.

Does the dean directing our white-haired tour
truly know the horror of this history?
How many other groups has she so graciously met
who snarl between clenched teeth and
hope to leave their feeble aging musk?
They utter a senescent growl:  Grrrreat White Hope….

They think
they were, still are, that hope.

How many come to see, and fail to “prove”
the damage
desegregation has done
to their school as she walks us
past old lockers (now shiny and blue) and labs
anxious to be used.
We enter spanking new locker rooms
and showers, and maybe this
is where she gets her revenge as she sees
their minds’ eyes conjure a mélange
of bodies…maybe think about THEIR kids,
grandkids, so glad they now live
far, far away from having to share this scene
with any technicolor human being.

We get a few pasty-faced photos and a half-assed cheer
on the bleachers, hug good-bye
to faces we struggled to recall after fifty years, despite
the communal memory machine.  And so I leave
with a satisfied sense of history, but grieve the lessons lost
to those who clawed against social evolution.

I drive a side street for a mile,
wide-eyed for signs of neglect or decay,
all the horrors predicted for this “changing neighborhood.”
While merchants have come and gone
these fifty years, most homes abide.
A few got crushed in the initial wave, but now
seem shored up, remade:  landscaped,
upper levels added, patios, new porches, touches
that will no longer price them out of the hood when it’s time
to move on. Just like on my parents’ block before
that first neighbor sold to the first black family
and the panic began. And Dr. King and
Jesse Jackson got their wish as red
lines disappeared, and they thought
the area would become fair game
on real estate maps. Thought housing markets
would stay sane perhaps.

Later that night, at our casual Meet and Greet, I wanted to place
all these white faces back in their old homes, on the periphery
of our school, not out in the exurbs or in Indiana and Michigan
where they live now. Not Houston or Florida or Phoenix.
I needed to feel us closer, to see us all as guilty of our time.
Even if only pawns in our parents’ white flight crimes.

It is not often I find myself surrounded
by so much achromatic skin.
One-hundred sixty alumni from a class of five-forty.
Thirty percent showed up.  Not one
accompanied by a spouse or partner,
date or friend of hennaed hue or
russet race.  Some things really do not change.
Or did those intermarried ones stay home?  A silent protest,
like several of the class with deep political slants
had privately discussed.  But boycotting the opposition
provides no voice; maintains the illusion that this whole class
supports things like MAGA hats, slogans,
and still believes the Great White Hope.

Across the hall a multi-year reunion from a newly
consolidated school:  the remnant of three
old, now closed, majority minority
southside schools. And suddenly
I remember our first football game from 1964.
Bogan vs. Parker. An afternoon away!
Their stadium.  No one booked
two teams like this
on evening venues.  We were taught
to be terrified of that side
of town.
They were taught to expect violence
from us.
(Did we know that then?)
The Parker kids
detained in bleachers while we
were loaded onto buses,
for safe deposit back at school.
A lot of yelling
from angry fans. But no projectiles,
no violence. Watts had not yet burned.  King
had not yet bled. The hate had not yet spread that far.
Yet small fights happened on and off the turf.
And here we were
meeting Parker women, fifty years later,
on neutral ground, rubbing shoulders
in the hotel john, discussing graduation years, dresses,
and avoiding that old elephant
in the room: this happenstance locale
that drew two schools – an old Chicago story –
one all black despite its multi-year, multi name
reunion, the other
all white despite
the difficulty of finding one, much less
the full complement of ten,
white students listed
in that school today.

Do any of these ladies who have us out-dressed
and out-classed
in the bathroom
remember that these are
the people who thought they were
the Great White Hope?

All I can think is “Great White Hope, my ass!”
‘Cause you know
both the food and the dancing
are better across the hall. 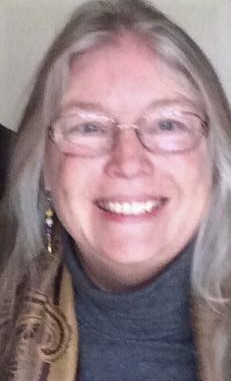 Kate Wooddell is a retired teacher, primarily of gifted students, English, creative writing, and civic education.  She has earned her living in many ways from the Mediterranean to the Marshall Islands, including as a professional clown and storyteller, occupational therapy “play lady,” a national park education ranger, and community college service-learning coordinator.  Kate is currently writing a young adult novel and a memoir.  She has published poetry in university journals and an essay in the WisCon anniversary program book.  She and her husband are currently engaged in local politics and are very active grandparents.